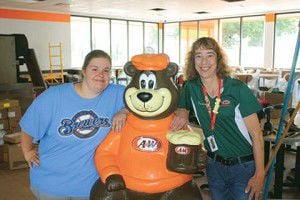 Keri Burzynski, left, assistant manager, and Donna Silgman, manager, stand with the signature A&W bear inside the new restaurant. Finishing touches are being put on the restaurant, which will open soon. 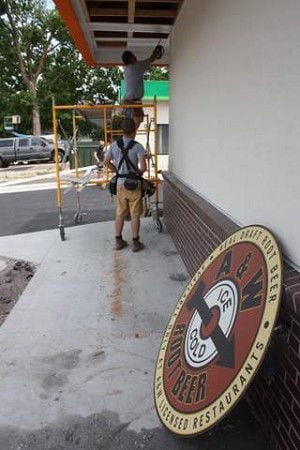 Keri Burzynski, left, assistant manager, and Donna Silgman, manager, stand with the signature A&W bear inside the new restaurant. Finishing touches are being put on the restaurant, which will open soon.

For ages, Donna Silgman has been asked the same questions, over and over.

When will cheese curds be back?

When will the floats return?

Now — finally — the manager of A&W in Ripon has an answer:

The purveyor of all-American favorites will return shortly — though they aren’t yet stating a date — after a multi-year absence caused by a major fire.

When it does open, it will be bigger and better than ever.

The new restaurant, now in its final stages of reconstruction, has been added on to what used to be only a Condon Ultimart store at the corner of Blackburn and East Fond du Lac streets.

The expanded site includes much more seating and space than the original, stand-alone restaurant, while retaining all the favorite foods A&W fans have come to know over the years.