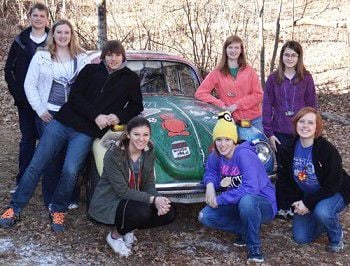 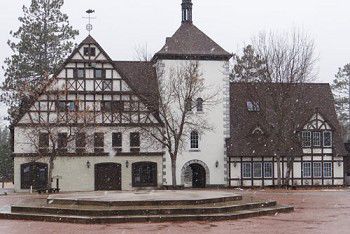 “Der bahnhof” (the train station) is one of the main camp buildings, designed to look like an authentic German building.

“Der bahnhof” (the train station) is one of the main camp buildings, designed to look like an authentic German building.

On a recent morning at Ripon High School, several students and their teacher boarded a van and drove to Germany.

At least they thought so.

Because when they arrived, everyone spoke German. The buildings appeared like they belonged in Germany. The food, music and culture were uniquely German.

But this wasn’t a journey across the Atlantic. It was a nine-hour drive to Concordia Language Villages, a program of Concordia College in the woods of northern Minnesota.

There, Ripon students and a few dozen others from other schools enjoyed a four-day weekend in March, immersed in everything German.

For Ripon’s German teacher, Sarah Seidler, it was a return to her roots, of sorts. Seidler spent several summers as a counselor at Concordia Language Villages before coming to Ripon.

But for the handful of Ripon students who went on this trip, it was an amazing educational experience.

“Students are immersed in a language,” Seidler said. “You’re doing traditional camp activities, like everything from arts and crafts and soccer, and learning dancing and cooking and sewing projects. Everything like that, but it’s all done in the language that you’re setting out to learn.”

Concordia Language Villages is an 800-acre site on two lakes that includes more than a dozen nations’ “villages” — Germany being the original. The idea was born in the 1960s, with new villages added over time, from French to Spanish to Chinese and several more ... Continue reading the full article in the April 9 issue of the Ripon Commonwealth Press.