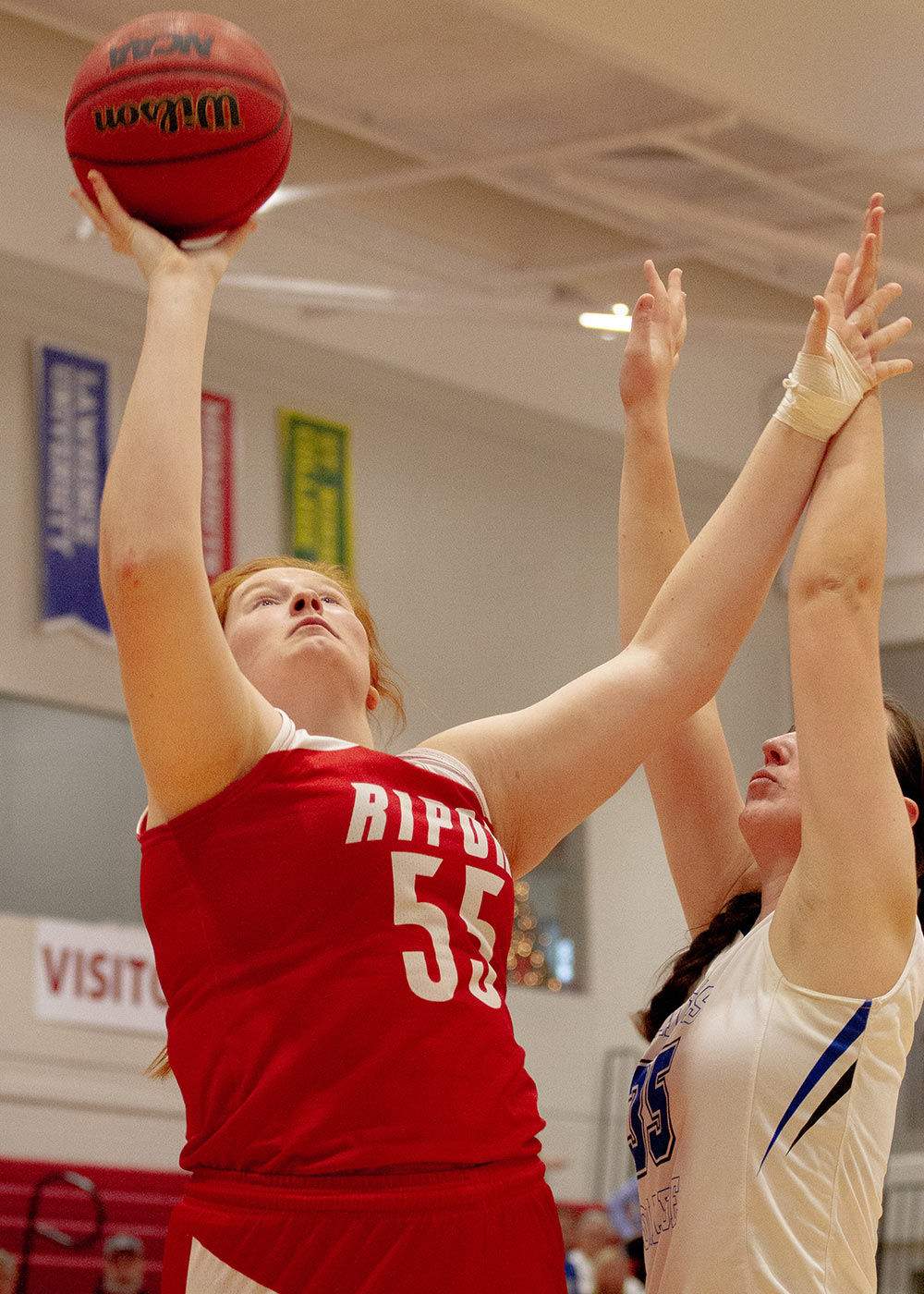 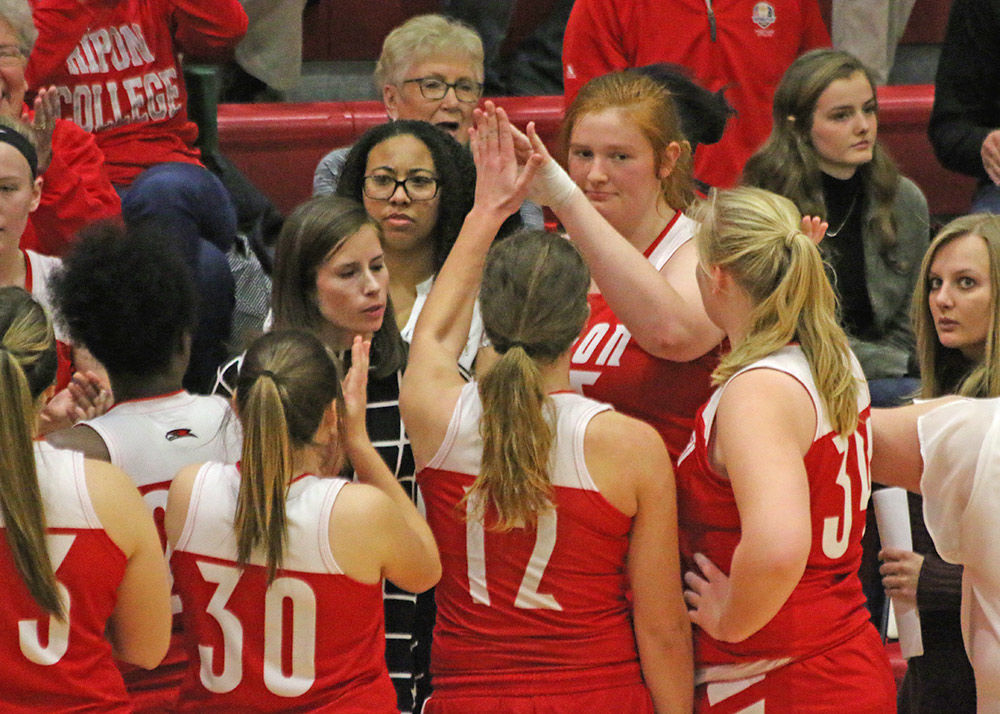 Maggie Oimoen is congratulated by teammates during a timeout after scoring her 1,000th point. 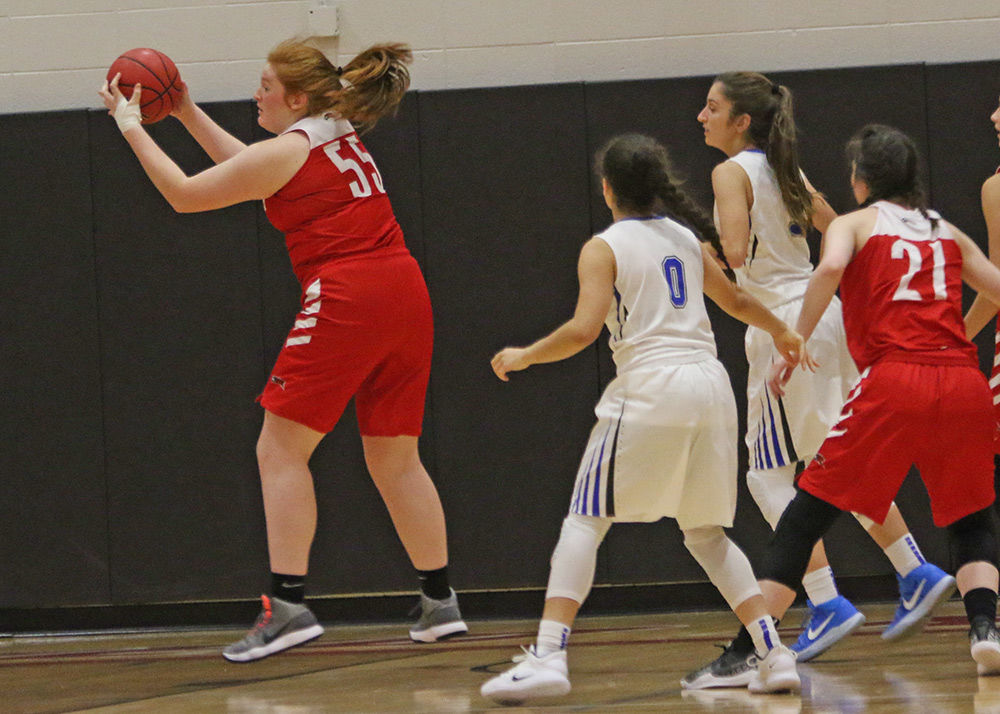 Maggie Oimoen grabs a rebound against Illinois College. She has collected 521 boards in her career and is on pace to finish inside the top-10 for rebounds in program history.

Maggie Oimoen is congratulated by teammates during a timeout after scoring her 1,000th point.

Maggie Oimoen grabs a rebound against Illinois College. She has collected 521 boards in her career and is on pace to finish inside the top-10 for rebounds in program history.

From the moment Maggie Oimoen stepped onto the Ripon College campus in the fall of 2015, she has been an unstoppable force on the basketball court.

Towering over the majority of her opponents at 6-foot, 2-inches and overpowering them with a solid frame, she led the Red Hawks in scoring with 250 points as a freshman, 346 as a sophomore and 320 as a junior.

And last week Saturday, Oimoen became the ninth player in program history to score 1,000 points and the first since Ripon native Erin Lind in 2013.

She reached the milestone early in the second half of Ripon’s 61-52 home victory over Illinois College with a layup, a game in which she finished with 21 points.

But the senior has not always been “the go-to girl.”

She came to Ripon from Barneveld High School in Wisconsin, where she wasn’t the first or second option on a talented team. She finished with just 518 points as a Golden Eagle.

“We had two D[ivision] I players on my team, so they did the majority [of the scoring] and I was more of a defensive threat on the team,” Oimoen said. “So I was more of a blocker, rebounder and stuff along those lines, and then I did my job where I needed to do it in high school.”

So when she joined the Red Hawks, she expected much of the same. It didn’t take long to realize that wouldn’t be the case as she was thrust in the limelight.

For that reason, scoring 1,000 points is even more special.

Read the full column, which includes information on where Oimoen has improved the most and what she still wants to accomplish, in the Dec. 6, 2018 edition of the Ripon Commonwealth Press.