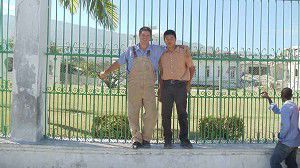 BRIAN, LEFT, AND Matthew Wells stand in front of the ruined palace in the heart of Port-au-Prince. submitted photo 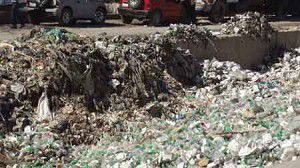 GARBAGE AND FILTH overflow a creek in the city of Port-au-Prince. submitted photo

BRIAN, LEFT, AND Matthew Wells stand in front of the ruined palace in the heart of Port-au-Prince. submitted photo

GARBAGE AND FILTH overflow a creek in the city of Port-au-Prince. submitted photo

ON JAN. 12, 2010, A DEVastating earthquake pounded Haiti, destroying much of the capital city of Port-au-Prince and leaving countless residents homeless.

Only days later, Riponite Brian Wells was there, ready to lend a hand in any way he could.

But he left the city amazed at how positive its people were, and how hard they worked — even in the face of great tragedy.

It affected Brian so much that he vowed to come back again.

He made good on that pledge last month.

Between Feb. 17 to 20, Brian returned with 15-year-old son Matthew and with little more than a duffle bag on their backs and the desire to offer support.

Once again, he was overwhelmed, not just by how awful conditions are in many places there, but by the spirit of the Haitians that persevered.

“I PROMISED I WOULD come back,” Brian said of what he told the Haitians a year ago.

On that trip, he’d slept in the neighborhoods, in the Haitians’ homes, amazed by their generosity.

This time, he got a hotel, but was sure to visit the friends he’d made earlier.

Just as last time, Brian just spent the time by lending a hand whereever someone needed help, whether it be visiting an orphanage or handing out Bible tracts.

“I think I ran into every single person in the city [I knew],” Brian said. “Everyone couldn’t believe I was back. Everybody came out; children ran down the street. It was like a welcome home.”

Only a little else had changed in the intervening year.

“It was still very dirty, but cleaner than last time,” he said, recalling seeing a man who stood in a creek that Brian described as “filth, raw sewage. He was pulling debris out ... and he had a smile on his face.”

AROUND PORT-AU-PRINCE, people made do — happily — with what they had, what was available amid the rubble of the ruined city.

Some people were “taking re-bar and making bed frames, stoves,” Brian said of how they would bend the reclaimed metal from broken-down buildings. “They were so clever.”

How could they be so happy after living for a year with so little?

“[They] were working,” Brian said, noting this was enough for them. “There is still a lot of work to be done, but the sunshine radiating off these people was [amazing].”...

To read the entire column, see the March 3, 2011 edition of The Ripon Commonwealth Press.