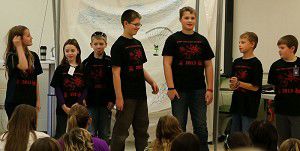 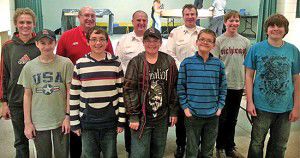 Last week, a “super typhoon” slammed the Philippines, laying waste to the nation of islands, leaving millions without access to food, water or medicine.

Earlier this fall, a wildfire raged through the woods adjacent to Yosemite National Park, causing some of the worst wildfire damage in California history.

With stories such as these almost commonplace in the news these days, one might feel a bit hopeless in the face of Mother Nature’s fury.

After all, what can one person, or even a group of people, do to mitigate the effects of such forces of nature?

You may feel that way, but don’t tell the kids in Ripon they can’t help.

THE DOZEN-PLUS KIDS in the club presented their ideas last week Thursday to middle-school-aged students in Catalyst Charter School as a test run for a competition they entered in Watertown over the weekend.

The students competed in two areas: first, with robotics created with Legos, as their name suggests.

But the second part is to conceptualize a product that could actually make a difference in the real world.

“This year’s theme, ‘Nature’s Fury,’ is about natural disasters and ways to help people deal with them,” said Dave Schoff, who leads one of two teams in Ripon. “My team, the ‘Landslide Ninjas,’ have researched landslides that result from wildfires. Their solution to protect people and property is to try to prevent landslides by replanting a burned area using aerial robots to precisely deliver mats of native grass seed.”...

The other team’s product also aims to be reproducible in real life.

“Our product is called the ‘Snuffler,’ which looks like an upside-down umbrella and is used to extinguish campfires,” said Andy Lyke, who leads the other team. “It’s made out of Nomex (a fire retardant material) to make it light weight, and it has a temperature gauge on it to let people know when the fire is cool enough.”

... Will they be able to turn their creations into real-world products? Maybe, maybe not.

But the students aren’t concerned. They’re just happy to have had the chance.

“It was cool to be able to create real-life solutions,” Micah Schoff said.

To read the entire column, see the Nov. 21, 2013 edition of The Ripon Commonwealth Press.