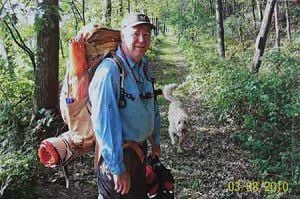 BARRY ROGERS PAUSES for a photo while walking one of a handful of trails along the way. submitted photo 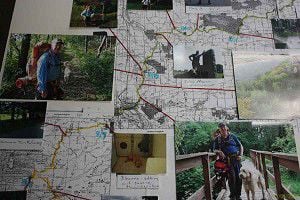 THIS IS THE route Barry Rogers took — travelling along back roads and wooded trails for 85 miles. Ian Stepleton photo

BARRY ROGERS PAUSES for a photo while walking one of a handful of trails along the way. submitted photo

THIS IS THE route Barry Rogers took — travelling along back roads and wooded trails for 85 miles. Ian Stepleton photo

THERE’S A SCENE IN “Forrest Gump” where a reporter asks Forrest, as he continues to run, “Why are you doing this?” His answer? “I just felt like running.”

On a searing, steamy August day, I can picture someone asking Green Lake resident Barry Rogers the same thing.

Sure, Barry — a former surgeon — is no Forrest. But for about a week this summer, they did share one similarity.

Barry chose to walk farther than 99 percent of Americans would dream — all the way from Green Lake to Madison (almost).

Why? Why not? He’s retired.

... The trek started Tuesday, Aug. 3, when he departed Camp Grow on Green Lake’s south side for the first of may days of hiking.

At just six miles, that day’s walk would be the shortest, as the hikes would stretch to almost 15 miles some days.

For the first three days, Barry was joined by a friend — fellow retiree John Gende of Princeton.

The two would walk and shoot the breeze, with no rush and no cares.

On the third day, for instance, the duo ran into an Amish farm stand, where John convinced Barry to stop for a tomato, and Barry hit it off with some of the Amish kids working there.

He half-jokingly asked one girl for a sandwich, and she promptly disappeared. Five minutes later, the girl’s mother appeared — with two massive sandwiches.

“We sat there for about an hour and had a banquet,” Barry said, noting he paid the woman $10 for the meal, and she still felt overpaid — and gave them a massive amount of blueberries as well.

One might think that was just Amish generosity, but Barry found that to be the rule, not the exception.

“People were so open and friendly — they seemed so happy to have someone on their road,” Barry said of the back roads he strolled down. ...

To read the entire column, see the Nov. 25 edition of The Ripon Commonwealth Press.