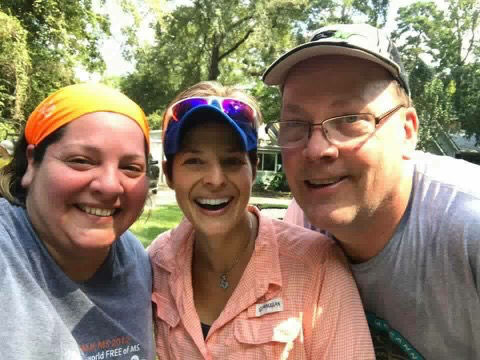 POLLY (HUTTON) LOOPER, middle, stands with former Riponites Nicole (Ramirez) and Dave Hermann. Their home was under more than 8 feet of water in Houston. submitted photo 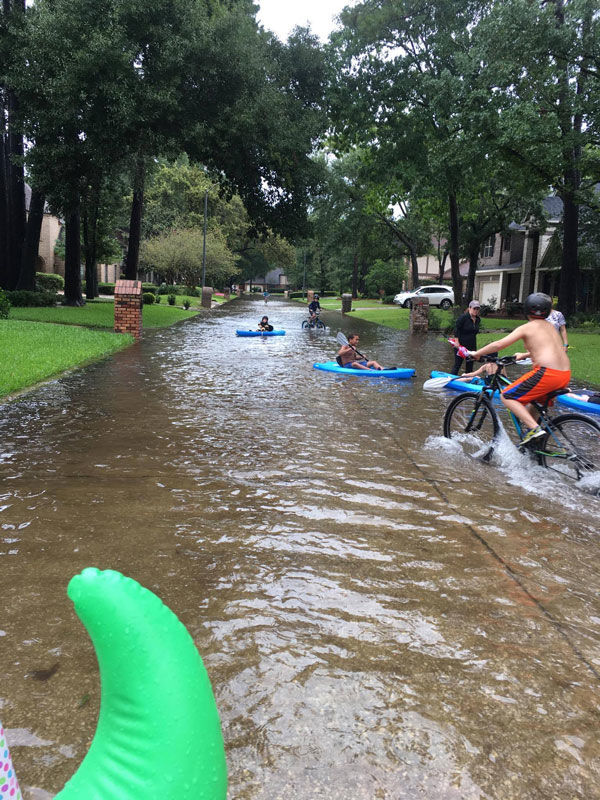 KIDS IN POLLY’S neighborhood bike — and kayak — down a flooded street a block from her home. submitted photo

POLLY (HUTTON) LOOPER, middle, stands with former Riponites Nicole (Ramirez) and Dave Hermann. Their home was under more than 8 feet of water in Houston. submitted photo

KIDS IN POLLY’S neighborhood bike — and kayak — down a flooded street a block from her home. submitted photo

I can write all I want about Hurricane Harvey and never truly understand what it was like to live through such a force of nature.

There really is no substitute.

That’s why I’m turning my column this week over to Polly (Hutton) Looper, who grew up here in Ripon before eventually settling in Houston. Here’s her story, trimmed just a bit to fit this space:

I was born and raised in Ripon, graduating from Ripon High School in 1996. I moved to Houston in 2005 [at the time of] Hurricane Katrina.

I was a rookie with hurricanes, or anything that lasted for days if it wasn’t a snowstorm. Katrina, Rita, Gustav, Ike [in] 2008, which ... battered us like a 24-hour tornado. Our roof lifted, and there was destruction literally everywhere you looked ... You think you’ve advanced beyond rookie status [before] Harvey.

We were as prepared as we could be. Generator, gas, food, water, cars on jacks, downspouts rigged to drain to the front of the house. Pool drained ...

Except, there was no way anyone could ever be ready for what happened. They warned us, we listened. The whole area listened. And countless lives were saved. ...

In the days of the storm, the rain really never stopped. It was constant. At first it was gentle. Then relentless. As water starting rising quickly, it became apparent, everything they had warned the storm would be was becoming true.

We eventually got out in a bit of a break and realized quickly, we could not get far. In fact, less than a mile in any direction of our home was flooded. In some spots, the water was 30 feet high. There were no more landmarks, no house numbers on houses, no street signs, all under water.

We could hear people yelling for help in nearby apartments. Social media, often times a burden, became a lifeline to others with big trucks and boats. Boats arrived and we began launching them on roads I normally run on ...

I am still awestruck driving or running down that road after the waters receded, seeing the waterline stories above my head. The sounds of airboats and military helicopters made the night something out of a movie.

The following days were spent helping others, doing things we are good at, cleaning pools, demo-ing relatives’ homes that were total losses. Handing out water, food and, like a true Wisconsinite, beer. Bringing many smiles to people. And, just showing up.

The importance of two simple words: showing up ... It means we are all in this together. Houston is as diverse as they come ... In a world where there has been so much anger, so much hate, Houston has shown the world: this is how it’s done ...

To read the entire column, see the Sept. 21, 2017 edition of The Ripon Commonwealth Press.