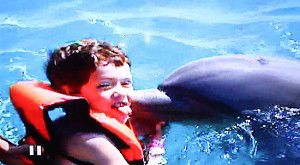 CHRIS LYKE sticks his tongue out at a smooching dolphin. 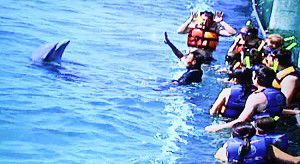 TIM LYKE MAKES strange gestures with his hands at the cameraman while the trainer tries to get a dolphin to wave good-bye to the other, more normal visitors, with his flipper.

CHRIS LYKE sticks his tongue out at a smooching dolphin.

TIM LYKE MAKES strange gestures with his hands at the cameraman while the trainer tries to get a dolphin to wave good-bye to the other, more normal visitors, with his flipper.

READING EDITOR IAN Stepleton’s column last week about a Ripon family that intentionally looked bored while being photographed riding down a roller coaster reminded me of my own family’s attempt to squash a shutterbug.

My wife and I decided to go to Cozumel, Mexico for our 25th wedding anniversary seven years ago.

Once there, the kids and I signed up to, as the brochure said, “Swim with Dolphins!!”

When we arrived at the large dolphin habitat inside the Chankanaab National Park, we were told that absolutely no cameras — still or video — would be permitted to record the interactive dolphin experience.

We soon discovered that the reason for that is the entire experience would be videotaped, with the assumption that we’d each shell out an additional $40 for a 10-minute DVD of our encounter.

Nuts to that, our family thought, feeling we had every right to take our own pix and shoot our own video. So we planned revenge.

Every time we suspected the camera was filming us, we’d make faces at it.

And so we did. We scrunched our noses, stuck our tongues out and tried to look cross-eyed.

Heck, the dolphins should have paid us for their encounter.

... minutes after kissing, holding and riding Flipper, we were ushered — still wearing our swimsuits — into a theater to view our adventure and then theoretically emerge $40 poorer.

We’d watch their video, we figured, but no way were they going to get one more buck out of us.

Settling back to review the footage, we started giggling, realizing that while the other six strangers in our group smiled sweetly at their new friends, we were going ga-ga goofy, playing to the camera to make sure the Lykes looked like loonies.

... Toward the video’s conclusion, we snickered, watching everyone — except me — waving at the dolphin as he flapped a flippered farewell at them. I’m stretching my hands out behind my head and making deer antlers at the dolphin trainer.

But the joke was on us and so the dolphins got the last laugh.

And as we sauntered away, we could hear dolphins in the background making high-frequency clicking noises that sounded suspiciously like laughter....

To read the entire column, see the Jan. 9, 2014 edition of The Ripon Commonwealth Press.