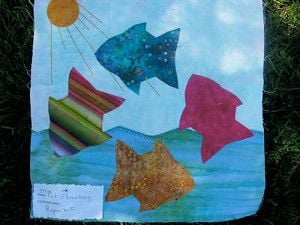 TOP-JUDGED QUILT blocks include two from Ripon, this one one by Pat Ehrenberg. 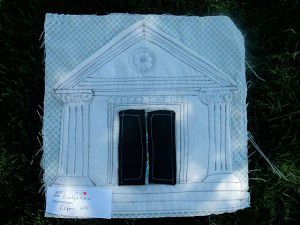 Another top quilt was crafted by Evelyn Kain.

TOP-JUDGED QUILT blocks include two from Ripon, this one one by Pat Ehrenberg.

Another top quilt was crafted by Evelyn Kain.

WHEN THE PRINCETON Public Library held its two big fund-raiser contests this past year, it drew interest, and entries, from places worldwide.

Despite participation from individuals as far away as Central America, it was a Ripon woman who won one of the two contests, a man from Marquette who won the other, and Ripon businesses and people who helped make the whole thing possible.

It’s all been part of the “Quilt that Built a Library” program, which invited people to contribute a quilt block and $5 to help the library’s building fund.

Each person who contributed was then to be entered into a contest to win a quilt made with 30 of the best blocks submitted. The remainder were to be given to Project Linus, which connects quilts with critically ill children.

Later, a second contest was added when someone contributed a pre-Civil War quilt to be raffled off as well.

According to Terry Kohl, who has been helping promote the program, the library did quite well.

What’s amazing is just how invested people from all over became in the program.

“There was quite a hub of activity literally from Green Lake County ... but we had blocks come from Belize, Canada and almost every state in the union,” Terry said. “... It was pretty exciting for me and for the library. All they did was open envelopes with money in them and beautiful blocks.”

WHAT’S AMAZING IS HOW much of a role Ripon seemed to play in the story.

For instance, the quilts might never have been made for Project Linus if not for a Ripon connection.

Back in December, “I stopped in at Bungalow Quilting [in Ripon],” Terry said, adding owner Judy Gauthier had a big packet of quilt blocks she’d received from an unlikely source.

“She said the Taycheedah women prisoners made these,” Terry said. “There is a woman named Maggie Shea who heads up a sewing/quilting group. They’ve been working with the prisoners for a long time.”

... While three of the 30 best quilt blocks came from prisoners, two came from Riponites: Evelyn Kain and Pat Ehrenberg.

They were among the almost 900 to contribute to the contest, which wrapped up March 31.

Only one question remained: who would be the lucky quilter to receive a blanket made with those 30 best blocks?

“Out of nearly 900 people, it was a woman from Ripon who won,” Terry said of winner Linda Ollerman.

... Then there’s the issue of the pre-Civil War quilt raffle — who won that?

Again, despite wide interest, it was an area resident who lucked out: a man from Marquette will be able to enjoy this piece of history.

“To have both those contests have local people win them was the coolest thing,” Terry said. “It was very rewarding.”

But the big winner, of course, is the Princeton Public Library, which — after the two contests — now is $6,305 closer to expanding its library.

To read the entire column, see the June 6, 2013 edition of The Ripon Commonwealth Press.