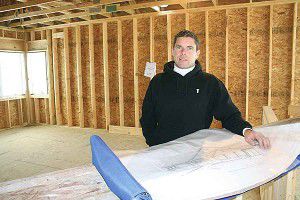 CHRIS MILLER LEANS against the breakfast bar being built in House No. 5. Plans for the home can be seen in the foreground. Ian Stepleton photo 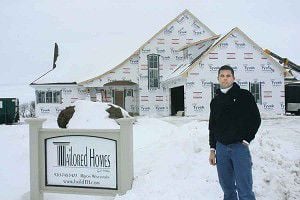 CHRIS MILLER LEANS against the breakfast bar being built in House No. 5. Plans for the home can be seen in the foreground. Ian Stepleton photo

Those who swear they’ll have to be buried in that home, because they’ll never move.

Then there is the Miller family.

The Miller family has yet to move into a home with the intention of moving back out soon after.

But, seemingly as fast as the owner of Tailored Homes can build a house for his family, they’re selling it to someone else.

“My 12-year-old, when I told him [we’re moving again], he just rolled his eyes,” Chris said of breaking the news last year. “He’s practically grown up on job sites.”

Welcome to the life of the Miller family. ...

They moved into the Cantebury Village home in 1995, and their first child — son Shae — was born while they lived there. Daughter Tori came later.

The Millers had planned to live continue living there for years ... but that’s not the way it worked out.

“The next phase in the subdivision had fewer houses around it,” Chris said.

So they sold their home, built another house and moved in.

And then they did it again. And again, and again ... all within the same subdivision. ...

Sure, it may have seemed for the Millers they’ve been living out of boxes for a decade and a half, but there is an upside — new home after new home, designed by their family, for their family.

“We try to put as much quality and as much detail as we can, within reason,” Miller said. “Every one of them we’ve built for ourselves, and every time it’s for what we want for ourselves.”

This time, Chris said this will be it. No more moves ... he says.

We’ll see. For now, the family is enjoying the anticipation of seeing their home finished....

Read the full column in the Jan. 14, 2009 edition of the Ripon Commonwealth Press.