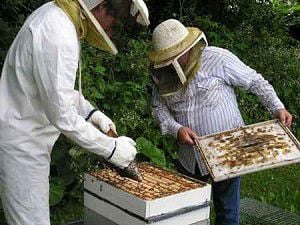 CHRIS SHESKEY, LEFT, and Hank Miller do a health check on a hive using a smoker and protective clothing. submitted photo 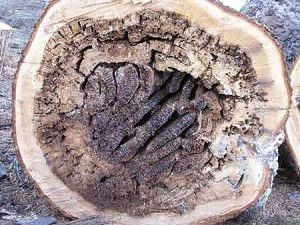 THIS TREE, CUT down this winter, was found full of honeycombs. submitted photo

CHRIS SHESKEY, LEFT, and Hank Miller do a health check on a hive using a smoker and protective clothing. submitted photo

THIS TREE, CUT down this winter, was found full of honeycombs. submitted photo

Common sense might suggest one of the drawbacks of being a beekeeper would be the bee stings.

Believe it or not, it’s one of the perks.

A beekeeper off and on since World War II, he doesn’t mind one bit being stung.

“The mosquitoes bother me more than bees, unless I get stung on the face,” he said.

Turns out bee stings may be a homeopathic remedy for arthritis.

In fact, Hank was complaining he hadn’t been stung recently enough this week — his arthritis in his back was starting to act up again.

Maybe this is one of the reasons beekeeping is taking off again in the area.

“At one point, in Fond du Lac County, there were only two of us, but it’s coming back,” Hank said.

Evidence of this turnabout will be on display this weekend, when the East Central Wisconsin Beekeepers Association (ECWBA) holds its monthly meeting in Ripon.

The group will gather Saturday at 9:30 a.m. in the Ripon Public Library, where it meets every other month. On opposite months, it meets in Fond du Lac.

THOUGH INTEREST IS growing, ECWBA President Jeff Champeau describes the hobby as still being “not too common.”

He sees it as enjoyable, though.

“Beekeeping is very fascinating and once people experience it, they get stuck on the hobby,” he said. “Plus, there are hive products to harvest such as honey, beeswax, etc.”

Hank got into it years ago literally by stumbling across it.

“When I was 8 or 9 years old, I discovered beehives in the barn, and Dad said they were Grandpa’s,” Hank said, adding his grandfather then bought him a few hives to get him going.

Since then, he’s dabbled in the hobby off and on.

“I have around 75 hives — that’s just a few. Most have around 1,000 hives,” Hank said, noting he teaches a course on it at the University of Wisconsin-Fond du Lac. “We get people who come from as far north as Superior for a class in Fond du Lac.”...

To read the entire column, see the March 10, 2011 edition of The Ripon Commonwealth Press.