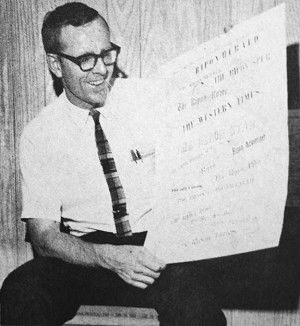 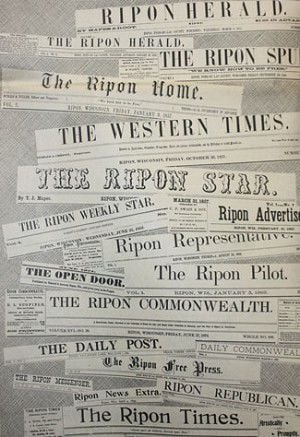 For many years, many newspapers served Ripon.

For many years, many newspapers served Ripon.

The Commonwealth is only one of 23 newspapers that have served Ripon since 1853, when the first paper, The Herald, was established. A few fun facts:

* The Herald began publication just nine years after 20 people moved up here from Kenosha to form the utopian village of Ceresco, and one year before the Republican Party was established;

* two of Ripon’s newspapers were published in German;

* during the 1880s, tiny Ripon hosted two daily newspapers (though not at the same time, and both were short lived);

Though starkly honest in its first edition, almost to a fault, the Ripon Commonwealth didn’t pretend to be a neutral purveyor of facts. In that January 1864 paper, publisher A.T. Glaze declared several principles would “preside at the [newspaper’s] political and editorial helm.” No. 1 on the list?

“The overthrow of slavery as a national political power and an usurper over the common rights of mankind.”

.... Doug Lyke, who with 40 years at the top of the masthead, oversaw the Commonwealth as long as any one else published a Ripon newspaper (tying with Charlie Inversetti), wrote in his first editorial on Sept. 6, 1962, that the Commonwealth is obliged to:

That four-prong mission remains today — as does the opposition to slavery — as we try to steadily guide Ripon’s newspaper toward its 200th anniversary, recognizing that while we are its temporary trustees, the Commonwealth’s owners remain the folks who buy, read and advertise in this periodical every week.

We’ll gladly accept “congratulations,” but the “thanks” go to you. — Tim Lyke

To read the entire editorial, see the Jan. 23, 2014 edition of The Ripon Commonwealth Press.