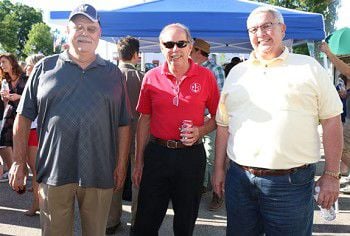 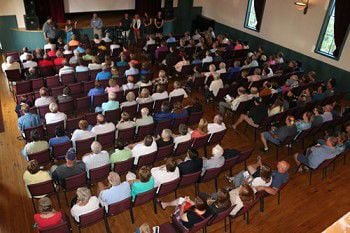 There was a mayoral summit in Green Lake last week.

Leonard “Charlie” Wielgosh, Richard Schramer and Jon McConnell (shown from left in the accompanying photo) were standing in the parking lot of the Thrasher Opera House, comparing notes about their respective communities of Princeton, Berlin and Green Lake.

What brought together the three hizzoners?

The same event that caused citizens of their communities to coalesce under a single roof: an advanced airing of the episode of “Discover Wisconsin” that featured Green Lake Country.

... the show as presented deftly showcases the area, marketing it not as five distinctly different communities, but as a destination that provides an interesting array of four-season fun.

The show ... gives residents of each of the featured communities reason to take pride in their hometowns. ... But more important than the community-pride the show instills is the critical marketing mass it conveys for the five cities, showing that viewed as a single destination, they provide a compelling reason to visit east-central Wisconsin.

And that is the raison d’être for the Green Lake Country Visitors Bureau (GLCVB) itself: Collaboration to prove that in destination marketing, the whole is greater than the sum of its parts.

Proving the point last week was a “success scorecard” presented at the GLCVB’s annual meeting — held right before the premiere — by fireball executive director Linda Ruggeri, working under the leadership of Jason Mansmith, GLCVB president and Ripon Area Chamber of Commerce executive director.

Ruggeri explained that tourism in our area generated $35.3 million in 2014, a $1.6 million jump from the year before, but with plenty of hospitality dollars still available for the taking. She added that the GLCVB’s use of a state grant to promote the Whopping Crane Festival caused visitors to spend $156,000 in our community during a September weekend last year.

The group is partnering with Circle Wisconsin to bring more motor-coach visitors to the area, and with Geiger Tours to host 30 national travel writers here a year from now.

This formerly dormant group is in its ascendancy, causing members (and mayors) from participating communities to work together as never before.

To read the entire editorial, see the June 25, 2014 edition of The Ripon Commonwealth Press.