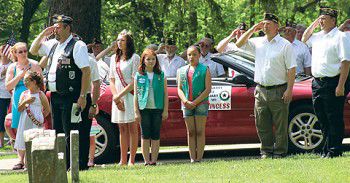 The beauty of Ripon’s Memorial Day observance is that — like those soldiers taken from us too early — it has seem frozen in time, changing little during the past half century.

This year’s service respected that tradition while adding a few new welcome additions.

Topping the list was the Sixth District American Legion Riders’ beautifully meaningful tabletop ceremony, the veterans seated in front of the stage, the names of deceased veterans featured on flags in the parade.

Credit for these innovations goes to American Legion Auxilliary members such as Mary Raatz and Betty Ott, the Legion Riders and many other proud members of Ripon’s American Legion and VFW posts. ...

Year after year, the ceremonies at the Village Green and at Hillside Cemetery are welcome spectacles, comfortable in their predictability yet dignified in their solemnity.

They leave little room for improvement — a better sound system at the cemetery, perhaps, or presenting the quilts before rather than during the Village Green ceremony.

Those who regularly miss Ripon’s respectful remembrance of its bravest residents might want to join the hundreds who consistently turn out to pay tribute to those who gave us so much while asking so little in return.

To read the entire editorial, see the June 5, 2014 edition of The Ripon Commonwealth Press.