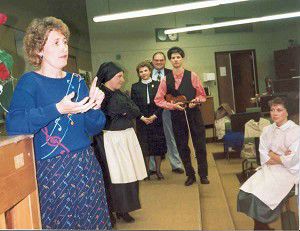 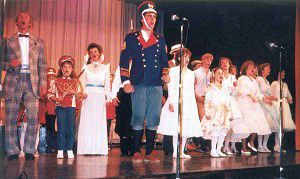 In 1978 Westphal began the first of her eight years Rosendale High School drama director. Administrators wanted her to produce plays, but insisted they had to be sandwiched in to the school calendar between fall and winter sports, or winter and spring athletic events.

Then came “The Pink Panther,” when the student portraying Clouseau’s henchman, Cato, earned a visit to the state wrestling tournament in Madison. “You’ll have to cancel the play,” the principal told Westphal.

“Oh no I won’t,” replied the indignant director. “All of those people have practiced for three months. It’s very important to them. Tickets have been sold.”

Then she offered the boss her own “suggestion.” “You just make sure he’s here at 7 p.m. tonight,” she said. “And he was.”

But that incident had lasting consequences.

“After that I thought, ‘I can’t deal with this any more,’” Westphal recalled. “So I’m going to start a community theater.”

A quarter century later, the RB Players continue to entertain with their annual musical extravaganzas. Last week Sunday they lowered the curtain on their 25th production: “The Wizard of Oz.”

Not only does the troupe — comprised of current or past residents of the Rosendale-Brandon School District — produce wonderful musicals, it also raises money to improve Laconia’s theater facilities including curtain, lights, sound board, seat covers and computers, as well as scholarships for students who serve on cast or crew.

It also has helped unify the residents of Rosendale and Brandon, particularly after the two school districts combined, causing some folks to be wary of the others. “We figured if we could get adults to work together that might help us unite a little bit,” Westphal said. ...

The Players over the years have provided Brandon and Rosendale with pride and many audiences with joy from their professional productions.

You can credit casts and crews of hundreds for that.

Or you can just tip your hat to the state-tournament bound wrestler who, in 1978, saw unknowingly provided a frustrated drama teacher with the inspiration she needed to create a community treasure, a legacy of love, that hopefully will outlast us all.

To read the entire column, see the April 7, 2011 edition of The Ripon Commonwealth Press.