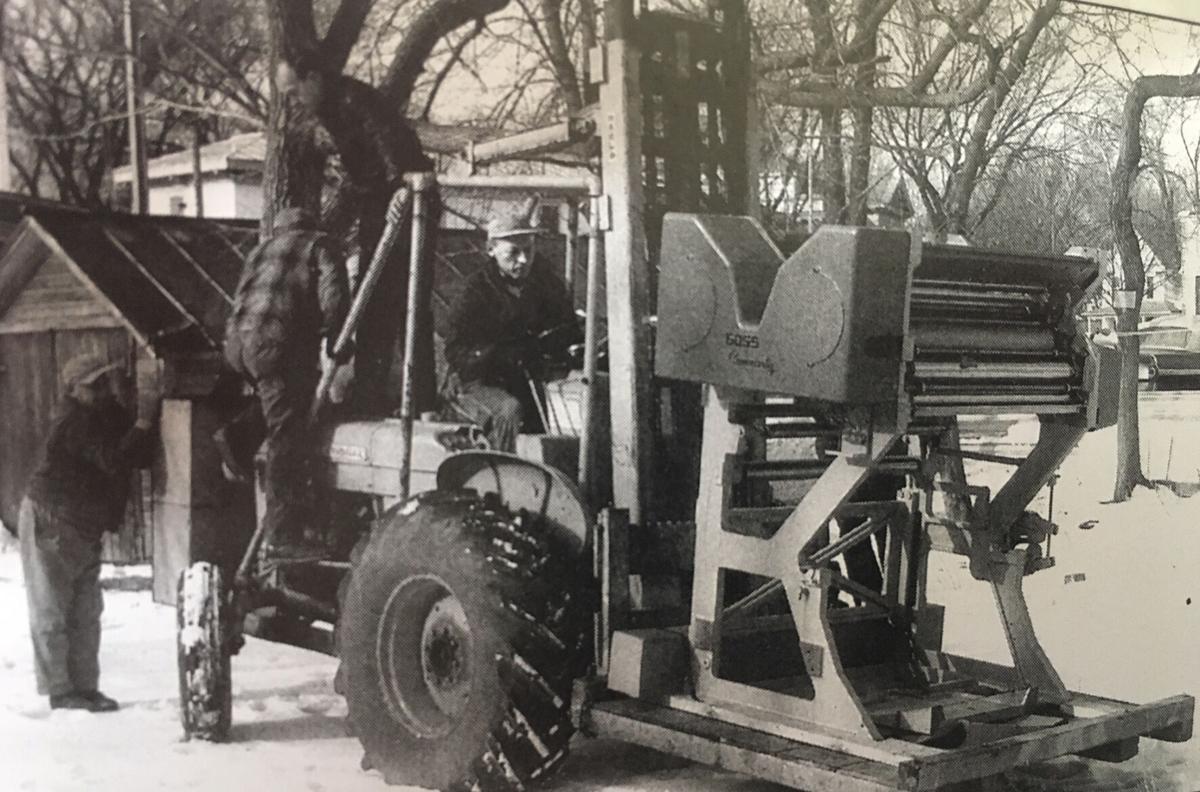 Vince Schmitt delivers a unit of the “new” press during the winter of 1965. 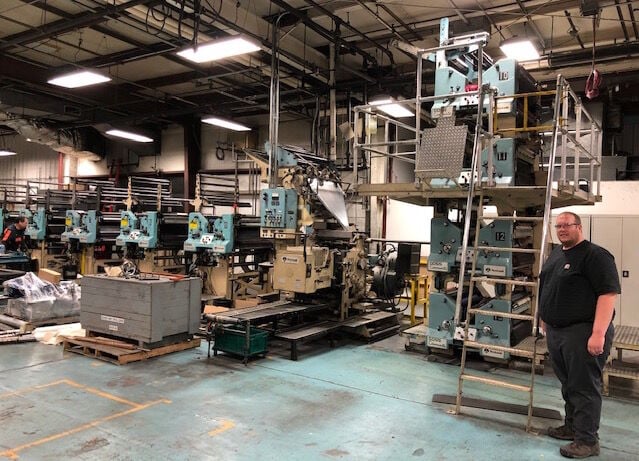 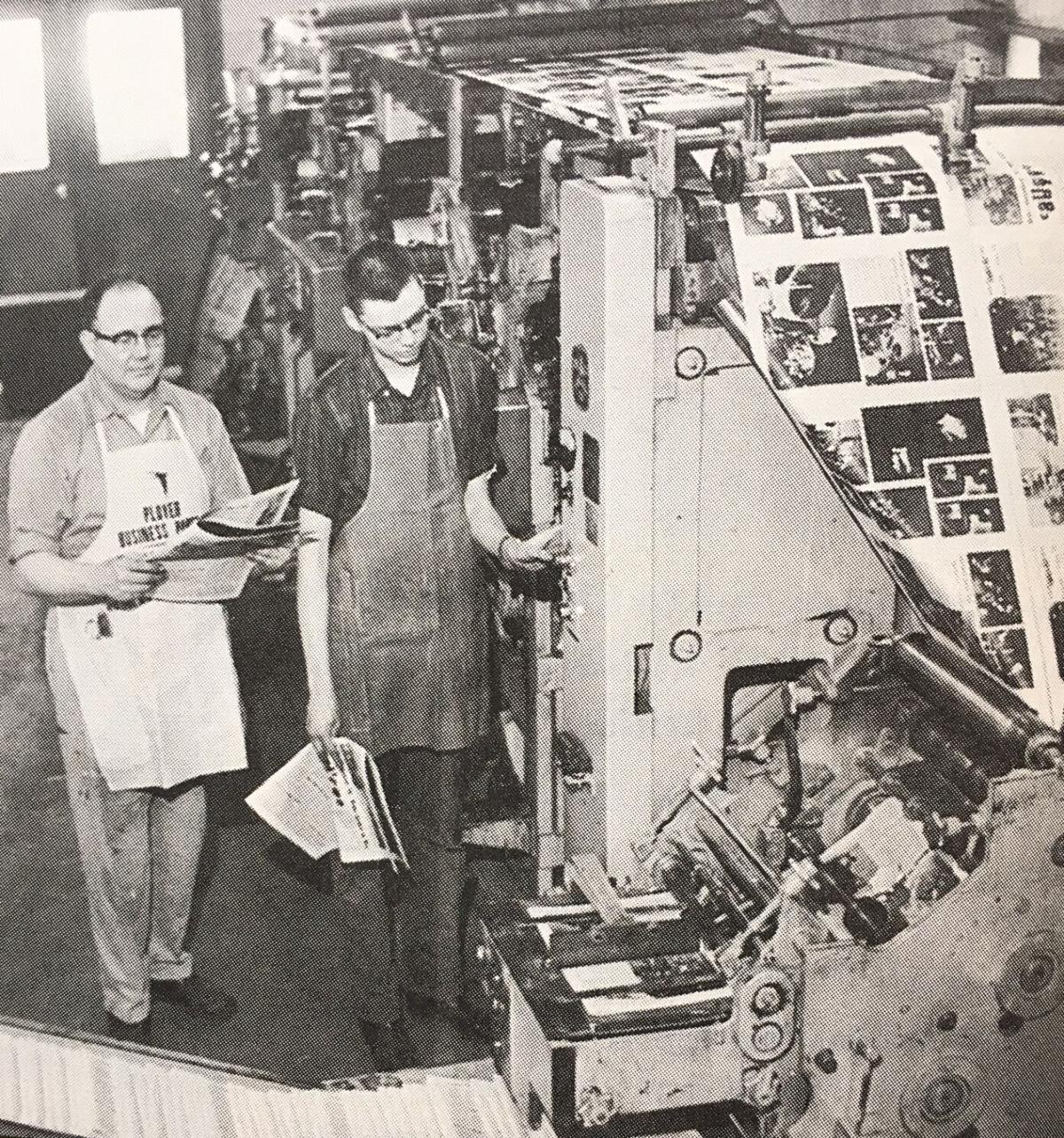 Harold Birkholz, left, and Lyle Lenz check the College Days newspaper as it rolls off the Goss Community press in the 1960s.

Vince Schmitt delivers a unit of the “new” press during the winter of 1965.

Harold Birkholz, left, and Lyle Lenz check the College Days newspaper as it rolls off the Goss Community press in the 1960s.

A newspaper printing press that for more than half a century produced the Ripon Commonwealth Press as well as other community papers in east-central Wisconsin died last month.

The press was born in Ripon in the winter of 1965 at 306 Blackburn St., where it revolutionized the local printing industry, at least as it had existed before the first Ripon Commonwealth was first published in 1864, the year before President Lincoln was shot.

Revolutionized? Consider: In 1964 the paper took a day-and-a-half to two days to print. Once the Goss cylinders started turning in 1965-66, the paper was printed, folded and bundled in a half hour to 45 minutes tops, thereby freeing up press capacity to do more, and more profitable, commercial work.

When Vince Schmitt and his crew used a forklift tractor to transport the first web press unit to the newspaper’s “back shop” 55 years ago, they helped usher in a new era, transforming the newspaper-with-a-tiny-job-shop into what would become a commercial printing powerhouse that served customers worldwide but continued, on Wednesday afternoons, to produce Ripon’s weekly newspaper.

In those early days, the three-unit Goss web press and folder also printed other area newspapers and shopping guides, with publishing schedules back then meaning the Goss’ work was done by Thursday noon, giving pressmen (yes, they were all male back then) Thursday afternoon and Friday morning to clean and maintain the presses, while taking time off for a beer or two purchased across the street from Davis Supermarket or around the corner at Milt’s Liquor Store, and to eat “cannibal sandwiches” consisting of raw ground beef and onions.

During its lifetime, the Goss presses (east and west, but mainly east) produced more than 2,800 editions of the Ripon Commonwealth Press.

Over time the “coldset” press — with ink transferred directly to newsprint (paper) — was replaced in popularity by “heatset” presses, which bake the ink into glossy paper stock, more appropriate for catalogs and magazines.

Ripon followed suit, augmenting the Goss with faster, commercial coldset presses and then, in 2003, acquiring its, and the country’s, first stacked Manroland Rotoman N press, which measured 129 feet long from splicer (the beginning of the pressrun) to folder. The decision to buy the press and get into the heatset business was the last one Ripon Printers owner Doug Lyke would make before dying of cancer in November 2002.

That decision proved to be visionary, as the Manroland was faster, fancier, louder and much busier than the true-blue (actually cyan, magenta, yellow and black are the inks that are mixed to provide color) Goss.

So slowly, as the mighty Manroland worked ’round the clock and a second Manroland headset press was purchased in 2009, Grandpa Goss began to wind down — less vital, less busy, less necessary.

Ironically, Manroland Web Systems and Goss merged in 2018 to become the leading supplier of web offset-printing solutions. But in Ripon, the loyal Goss finally was put out to pasture in March.

Yet it will long be remembered for playing a critical role in the democratic process by producing newspapers that for decades chronicled the experiences of Ripon residents, sharing their pride and tears, giving them a common base of knowledge and holding accountable the people who wielded control over their wallets and lives.

As former Ripon Printers President Andy Lyke said: “The old beast served us well over the years… it was the cornerstone of the business for many years.”

So rest in peace faithful friend. And know that you have the gratitude of people who unknowingly depended on you each week to inform, entertain and unify their community.