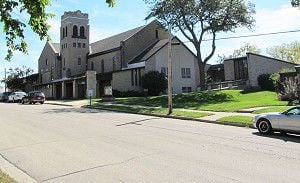 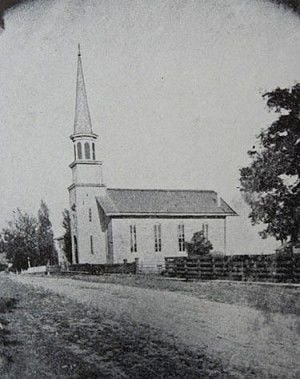 The Scott Street church as it looked in 1865.

The Scott Street church as it looked in 1865.

... While a member of Ripon’s other “United Church of Christ,” I have always held a soft spot for the Scott Street church, which holds its grand 150th anniversary celebration this weekend.

I attended it faithfully. But not on Sundays.

That’s when our Boy Scout Troop 37 gathered in the basement, and Scott Street church and choir member Marvin Stark worked with young men as scoutmaster.

For decades, thousands of Ripon boys have been in that basement on Mondays and Tuesday evenings, learning to tie knots, earn badges, and race pinewood cars and raingutter regatta boats.

Such outreach is a sliver of what the church did. Most of its ministry has taken place nowhere near Scott Street.

Members of Scott Street church over the past century and a half have changed lives with their youth programs, puppets, turkey dinners, choral concerts, dartball fellowship, visits to shut-ins, marriages and funerals, potlucks and certainly with compassion shown to the less fortunate through words and deeds.

Ripon’s second Habitat for Humanity home is being built through the leadership of the Rev. Gary Miller, Scott Street’s co-interim pastor, and with $25,000 from the church’s ministry fund.

Fifteen decades of good work remind us that Scott Street is among Ripon’s oldest houses of worship, having been established by a Lutheran pastor from West Bend 10 years after the founding of Ripon College, nine years after the Republican Party was born and five years after Ripon was incorporated.

The Rev. Miller points out in Ian Stepleton’s front-page story this week that the Scott Street church’s commitment to social justice has caused it to be “as concerned with out-reach as in-reach.”

And so its many ministers of all ages and backgrounds bring their Christian conviction, which lives in their hearts but is nourished on Scott Street, to Ripon’s schools, hospital, businesses, industries and farms.

Congratulations to them, and to their proud association with a church lovingly identified with a street, which reminds us of where the work of Jesus Christ truly takes place.

To read the entire editorial, see the Oct. 3, 2013 edition of The Ripon Commonwealth Press.