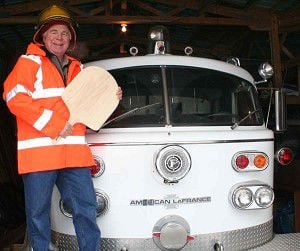 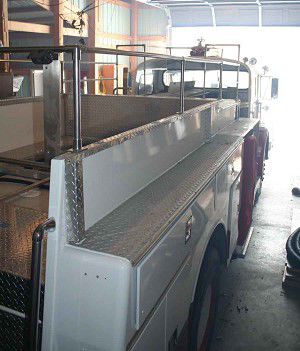 This column is part two of the retirement coverage of Green Lake Dr. Barry Rogers. Read the first article in the Jan. 14 issue.

His career is winding down, but definitely not his sense of humor.

After three decades as a local surgeon, Green Lake’s Barry Rogers plans to retire this year, and enjoy a new ambition:

Being a fireman. Of sorts.

He’s not your typical fireman, because he doesn’t drive your everyday fire truck.

Rogers has purchased a 1969 American LaFrance pumper truck, finding it in Pittsburgh via the Internet. Now he’s having it refurbished into something entirely different.

It’s basically a restaurant on wheels ... like no other.

To begin with, when Rogers fires up the engine, one could mistakenly assume the world is coming to an end.

That baby is LOUD. And if you think it’s loud, you haven’t heard the horn.

On the back of the fire truck, Rogers has installed a 75,000 BTU commercial pizza oven. It can cook up to 150 pan pizzas in an hour.

“And they are good,” Rogers said. “I can cook far more pizza than you can eat.”

Along with the pizza oven, there’s also a coffee maker, soda fountain, popcorn machine and ice cream chest on board. These amenities have been installed within the truck, along with a generator and propane tank to supply energy.

The generator alone is 6,500 watts. Rogers jokes he can run everything but a rock band.

Next, he plans to install a beer tap and cooler. It’s a “work in progress,” he admits.

There’s even a hand-washing sink near the back, “So I’m up to code,” Rogers said.

The additions have been made at Rennert’s Fire Equipment Service in Markesan.

To be clear, the truck looks normal from the outside. Most of the additions are tucked away in the truck’s compartments.

“It’s fun as heck driving down the highway,” Rogers said. “It turns a few heads.” Read the full column in the Jan. 21 issue of the Ripon Commonwealth Press.