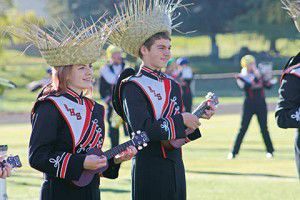 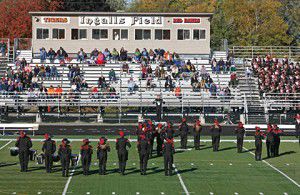 Lively pep band music thundered over Ingalls Field as spectators enjoyed from the stands, the roadside and houses blocks away.

Only no sports team was playing.

This was Monday morning, bright and early.

While most of their schoolmates were sleeping in, enjoying the Columbus Day holiday, band students from Ripon, Berlin and Winneconne high schools were all tuned up and dressed in crisp uniforms, ready to show who can do the best routine on Ingalls Field.

The 126 members of the Ripon High School band offered a show done at this year’s Homecoming: “Tropic Like It’s Hot.” It featured songs “Hawaii 5-0,” “Walking On Sunshine” and the reggae version of “Somewhere Over the Rainbow,” with student Derek Rodriguez soloing on steel drum.

Berlin High School was next, performing a marching routine with music from Cirque du Soleil’s “Ka.”

Closing the three-school march-off was Winneconne High School, playing pop songs by the band Fun, arranged by a student who accompanied the marching band from the sideline on keyboard. Songs included “We Are Young,” “Some Nights” and “Carry On.”

Ripon High School band director Sandy Polcyn said directors chatted about having a marching showcase last year, but they couldn’t nail down a date to use Ingalls Field between sports and student commitments.

Finally on Monday, it all came together.

Read the full story in the Oct. 17, 2013 edition of the Ripon Commonwealth Press.