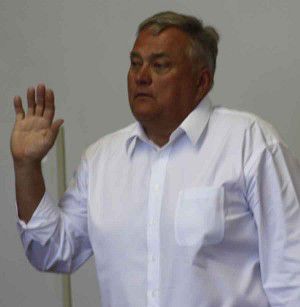 Mike Fredrick is sworn in before taking the witness stand. photo by Aaron Becker 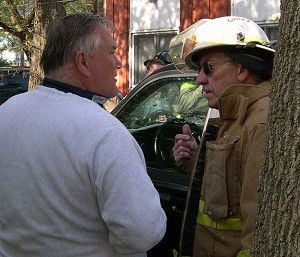 Fredrick speaks with a firefighter at an Oak Street fire in 2006. photo by Aaron Becker

Mike Fredrick is sworn in before taking the witness stand. photo by Aaron Becker

Fredrick speaks with a firefighter at an Oak Street fire in 2006. photo by Aaron Becker

After a daylong hearing at Ripon City Hall, Ripon’s fire chief has been terminated. At 8:20 p.m. today (Friday), an independent, five-person commission upheld the Ripon Area Fire District board’s recommendation to terminate Mike Fredrick. It was a unanimous decision. The board agreed that he violated multiple board directives, specifically regarding fire inspections and making purchases without board approval. Fredrick had been with the department since 1969, serving as chief since 1994. He was on unpaid suspension since March, awaiting today’s proceedings.

The hearing included more than a dozen witnesses speaking in a court-like setting, including Fredrick himself. After a full day of testimony, the commission retired to closed session for more than two hours before announcing the decision. Fredrick’s termination is effective immediately. See the July 8 Commonwealth for full coverage.