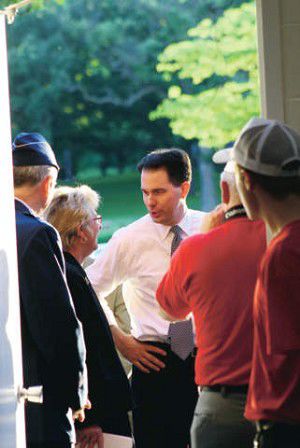 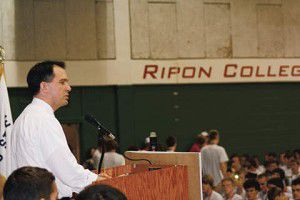 There are plenty of reasons to be proud of America’s past, and hopeful about her future.

That was a universal message from several big-name speakers during the 72nd-inaugural ceremony of Badger Boys State last week at a packed gymnasium at Ripon College, with Gov. Scott Walker and others making return appearances.

The more than 800 Badger Boys — to be high school seniors this fall — were hand-picked from all over the state to attend the annual weeklong summit on government.

Walker made his third-straight appearance. He had walked that same campus as a Badger Boy in 1985.

“It’s something that opened my eyes back in 1985 ... to the importance of believing in America as a way of life,” Walker told the crowd.

He urged the Badger Boys to view their weeklong experience not as a resume builder, but an “investment.”

Walker lauded the veterans in the audience, having them stand to a thunderous applause.

He also praised the Badger Boys themselves.

“You’re the best of the best,” he said. “... These are the people that are going to come home in the next year and make an impact in their senior year.”