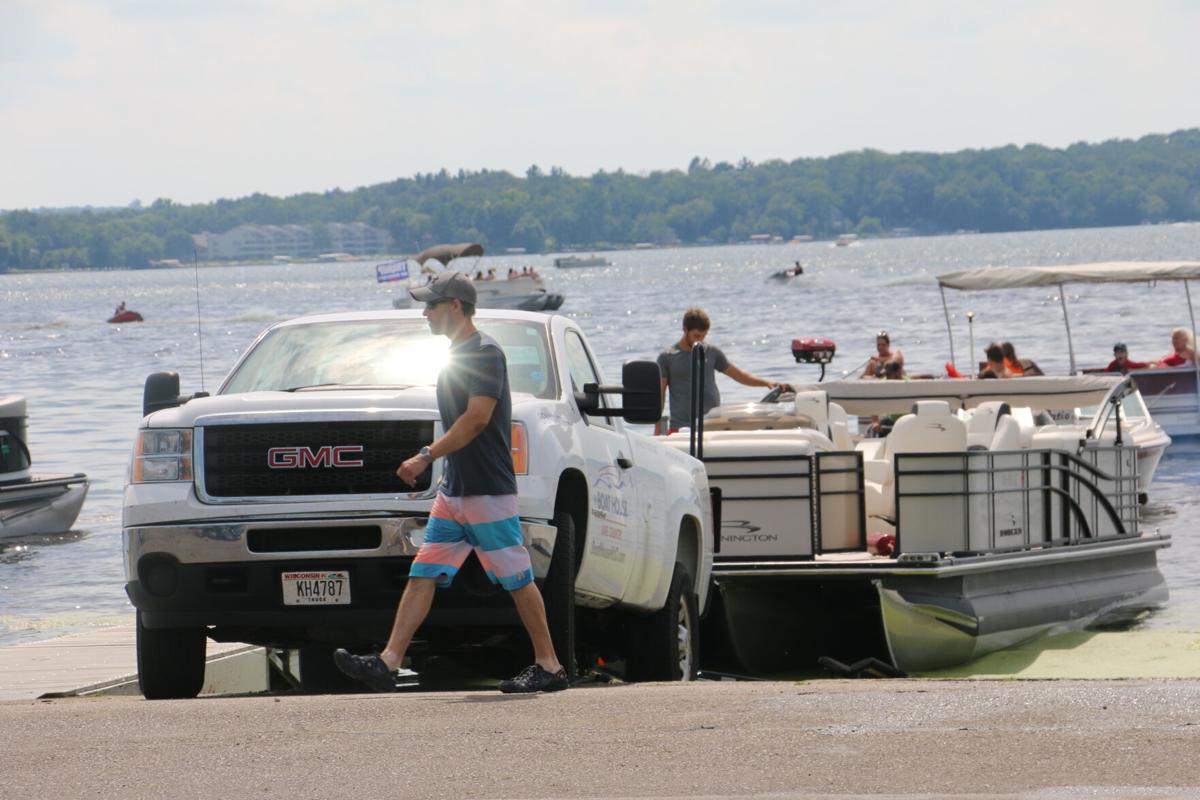 A boat is pulled out of the water at Sunset Park in late July as another boat waits its turn. The Sunset Park boat launch is filled with boats and trailers on a hot summer day. 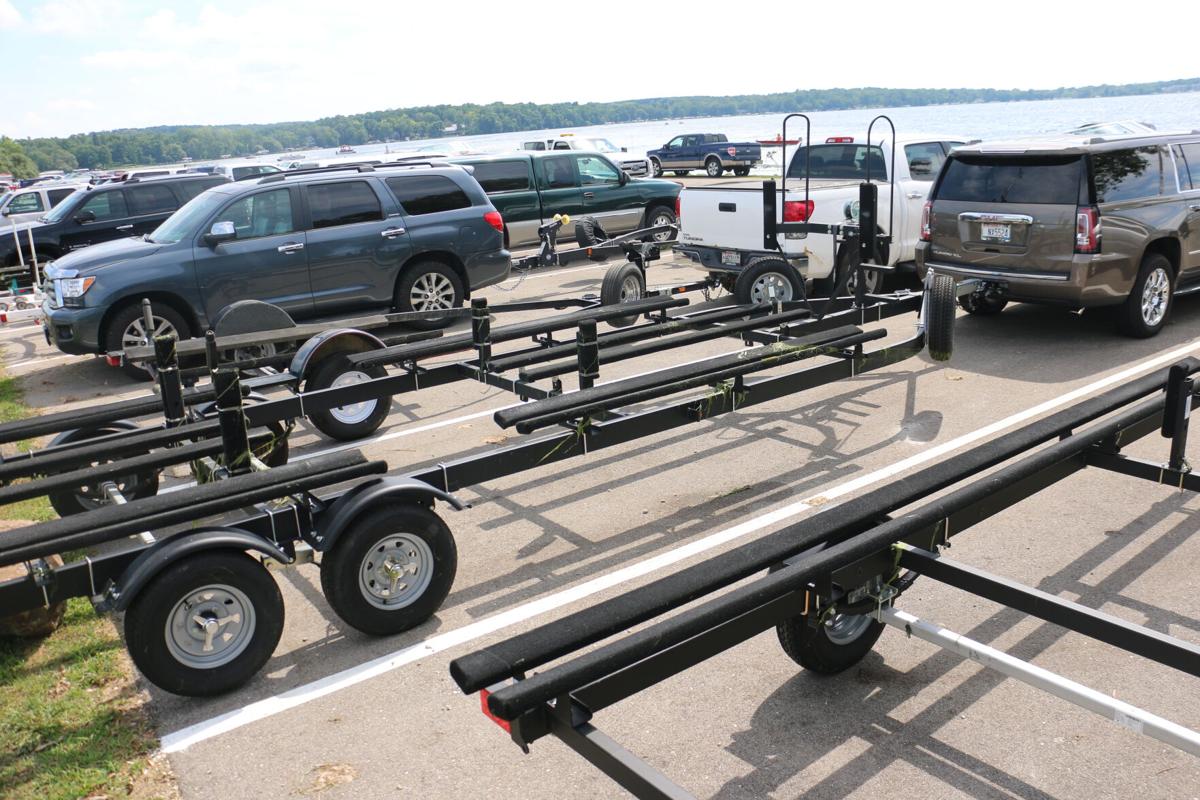 The coronavirus pandemic has caused a migration of sorts in Green Lake as summer tourism has been better than originally anticipated, given the cancellation of many events.

According to Green Lake Area Chamber of Commerce Executive Director Lisa Beck, there are a couple of reasons for that migration.

Among them are residents who have homes on the lake staying for a more sustained period than in other years. Additionally, families are relocating to Green Lake from larger metropolitan settings and buying homes on the lake.

Many of the area’s summer residents, who normally may have stayed for a week here or there throughout the season, have decided to remain in Green Lake for the summer.

Reasons for staying vary; some are avoiding large crowds in big cities, while others are working remotely from Green Lake and don’t need to return home for work.

“In the beginning, if people were here when we locked down, they remained here. For a couple months, they didn’t go back to their homes in Illinois,” Beck said. “So we did see that spike in people that were here that are taking advantage of their summer home and using it as a year-round home.”

In addition to summer residents remaining in the area, Beck also is seeing an influx of vacationers coming to Green Lake for a day trip.

“I think we’re getting those people that are in the state of Wisconsin that are really researching ‘Where can we go?’ And they’re packing up and doing last-minute vacation planning and coming here,” Beck said.

As a result, she noted Green Lake’s parks, boat launches, bike trails and Big Green Lake itself have been busier than last summer.

“One of my hotel owners said they were down 80% in sales in May, and then June was a record month for them,” Beck said. “June was when we really started seeing an uptick in people coming here. July was by far the highest and now in August people are still coming.”

According to Beck, the area’s cabins and cottages near the lake, where families can rent a dwelling are doing “very well.”

“People are coming, renting the whole house and spending a week staying here in Green Lake,” Beck said. “I talked to one of my board members and she had people in the driveway of her bed and breakfast calling her, asking if she had a room available, like literally driving around looking for a place to spend the weekend.”

Even so, she noted the area’s hotels and motels are operating at 50% capacity as they face tougher social distancing restrictions and rooms are required to remain vacant between guests.

In terms of real estate, another board member told Beck that the industry is “going crazy.”

“People are buying homes and relocating,” she said. “He had mentioned that there were a handful of people that bought homes in Green Lake that are from out of state and they’re actually enrolling their children into the Green Lake School District.”

The influx of summer residents, day trippers and new residents has given Green Lake’s downtown businesses a significant boost.

“I’m hearing great things about how busy it’s been in town and we’re hoping everyone is staying safe and following our safety guidelines that all of our stores and restaurants are implementing,” Beck said. “I think that they’re doing their part in making people feel safe when they do come to visit.”

She added that Green Lake County’s ability to keep its coronavirus case load relatively low has also contributed to the boost in tourism.

“One of the guests that had stayed at one of our bed and breakfasts said, ‘I looked at Green Lake’s numbers and they’re down. And I felt comfortable coming to Green Lake to vacation,’” Beck said.

As of Aug. 17, Green Lake County had four active cases and 63 total confirmed cases, according to the Wisconsin Department of Health Services.

While pandemic tourism has given a financial boost to downtown shops and restaurants, Beck noted performance venues, such as the Thrasher Opera House still cannot operate at full capacity.

“They’re hurting a little bit, but they’re trying to make due with outdoor events and just trying to readjust,” she said.

At the same time, Beck has been working closely with Green Lake County Public Health Officer Kathy Munsey to plan Harvest Fest and ensure the event can be safe.

“We’re hosting this event,” Beck said. “Some may not agree that it should be taking place but we’re doing everything in our power to make it safe.”

While the planning is still in the early stages, she noted precautions include increased spacing between vendors, “one-way” signs for foot traffic at the Harvest of Bargains rummage sale and mandatory masking for vendors.

The chamber has eliminated the Harvest Fest beer garden, but local restaurants will host mini-beer gardens in an effort to create physical distance between people.

Overall, Beck is thrilled with the influx of people in the community and she hopes people can safely enjoy Harvest Fest next month.

“Green Lake has always been known for the beauty and relaxation of the area,” she said. “I think people are drawn here because it gives them the charm of a small town and they’re embracing that because they’re coming to get out of the big city.”