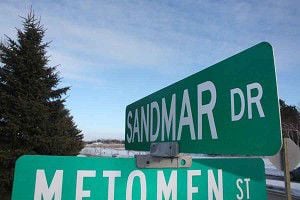 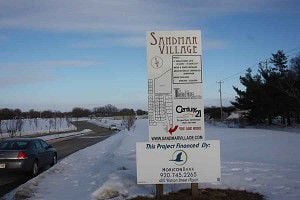 This sign at the Metomen Street entrance to Sandmar Village shows where homes could be built. Only one so far (seen in background) has been constructed.

This sign at the Metomen Street entrance to Sandmar Village shows where homes could be built. Only one so far (seen in background) has been constructed.

Last week, Luther Hills residents asked city leaders what most in Ripon have wondered as well:

Why hasn’t the drainage problem at Sandmar Village been fixed already?

Some have suggested, “Just go out and fix the problem.”

An intensive look at the situation suggests it isn’t that simple.

Funding, ongoing negotiations and regulations each play a role in why someone can’t just open up a channel and start draining the south-side development tomorrow.

And ultimately, even if one entity or another said it has a shovel in hand, ready to start removing a downstream restriction, an even bigger, little-known problem remains on the other side:

A state and federally regulated wetland.

On the same land on which the downstream restriction exists — land owned by Ripon residents Bob and Marge Burling — a wetland also is sited.

This means anyone hoping to remove the restricting point first must solve this new problem, then get additional review and approvals from the DNR.

As Gus Glaser, the DNR water resources engineer who has been reviewing this case, said, “It’s just not going to be easy with this one.”

Read the full story in the March 4, 2010 edition of the Ripon Commonwealth Press.