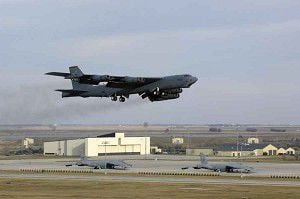 A B-52 such as this one could visit Ripon in May. 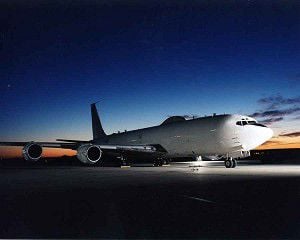 This E6B flown by the Navy could be like one tentatively scheduled to visit Ripon in May.

A B-52 such as this one could visit Ripon in May.

This E6B flown by the Navy could be like one tentatively scheduled to visit Ripon in May.

Ripon may never have had a low-altitude fly-over of a major military plane for a local celebration before.

In the span of five days in early May, the community could enjoy two — both aimed at honoring current and past members of the military ... as well as those who paid the ultimate sacrifice, including Sgt. Andrew Wallace.

A pair of fly-overs of gigantic military planes are tentatively scheduled to take place in early May, assuming weather and other factors do not interfere.

The bigger of the two will occur May 12, as the city holds its first-ever Armed Forces Day celebration. For this event, a B-52 bomber will fly over Ingalls Field at just 1,000 feet above the ground.

A few days earlier, May 7, another plane also is tentatively set to do a fly-over of the city. In this case, the less-well-known U.S. Navy E-6B also will do a low-altitude salute to the city.

Exact times for these planned fly-overs are still to be determined. On May 7, the fly-over is likely to occur between noon and 1 p.m., while the May 12 fly-over is expected between 6 and 7 p.m.

More specific times will be announced as plans are firmed up and the dates get closer; planning for the flyovers only began last week.

Read the full story in the April 15, 2010 edition of the Ripon Commonwealth Press.