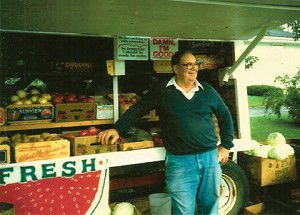 The late Ald. Russ Stewart stands at his garden stand. Vegetables sold there may have been grown in a garden plot that soon will be turned into a Habitat for Humanity home. 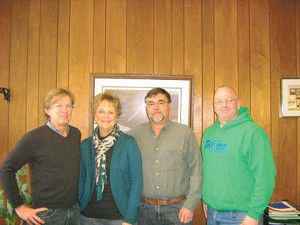 Donating the property this winter were, from left, brother Jim Stewart, sister Barb Rowan and husband Vince Rowan. Receiving the property is Paul Osterholm of Habitat for Humanity.

The late Ald. Russ Stewart stands at his garden stand. Vegetables sold there may have been grown in a garden plot that soon will be turned into a Habitat for Humanity home.

Donating the property this winter were, from left, brother Jim Stewart, sister Barb Rowan and husband Vince Rowan. Receiving the property is Paul Osterholm of Habitat for Humanity.

Nothing about the dead-end stub of Wolverton Avenue east of Eureka really stands out.

But it’s not always been so.

Riponites who can think back to the late 1960s probably remember it a bit differently.

They may recall the Stewart family out there, working the land.

As a youngster, Jim Stewart remembers “battling countless weeds, which I firmly believe were taking root behind me as I moved along,” he joked of helping dad Russell out.

It was a bountiful place that offered goodness to countless Riponites. The fruit and veggies grown there would find their way to Russ’ farm stand, where he often snuck a few extra ears of corn or a few more peas into the bag.

A fine heritage, and one Jim and sister Barb Rowan chose to honor this winter through another kind of gift.

Though much of the land off the short street has been developed, one parcel remains vacant.

The family held on to it for 40 years, since Russ developed Wolverton Avenue around 1972.

But this winter, Jim and Barb donated that final parcel to the Fond du Lac chapter of Habitat for Humanity.

By fall, something else again will take root: a family.

In September, Habitat for Humanity will hold its first build in Ripon in 11 years.

Read the full story in the March 14, 2013 edition of the Ripon Commonwealth Press.