Skip to main content
You are the owner of this article.
Edit Article Add New Article
You have permission to edit this article.
Edit
Home
News
Green Lake News
Sports
Editorial
Obituaries
Preferred Business
Multimedia
Real Estate
What To Do
Classifieds
Contact Us
e-Edition
OMGHired Local Jobs
1 of 4 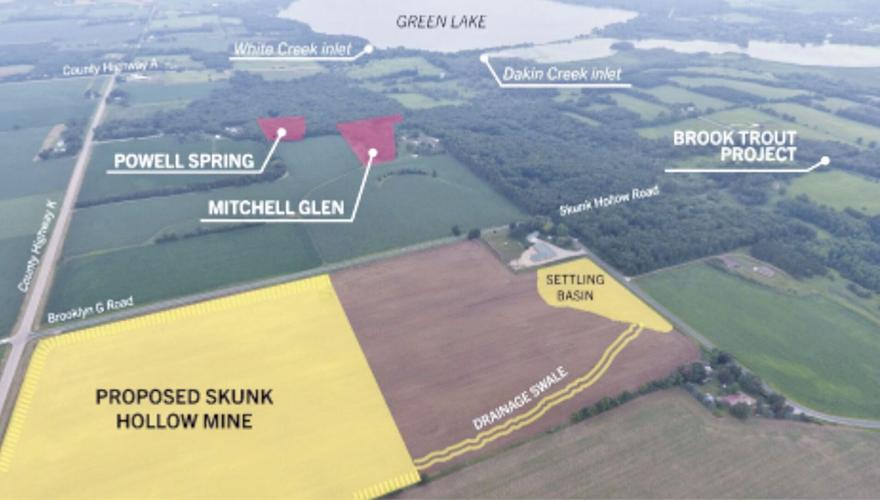 An aerial overview shows the approximate location of the Skunk Hollow Mine and its stormwater features in proximity to  Green Lake and surrounding water resources. Groundwater flows from the proposed mine site northwest, toward  Green Lake. 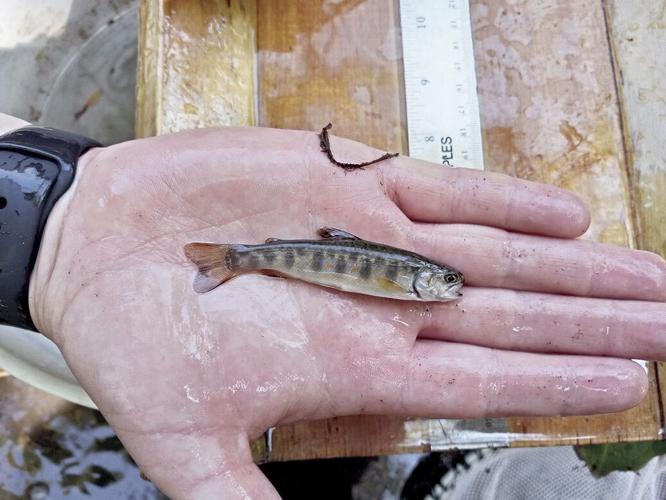 A DNR biologist shows a young brook trout in Dakin Creek from a fish survey in July. Brook trout are now naturally reproducing and not solely reliant on stocking. 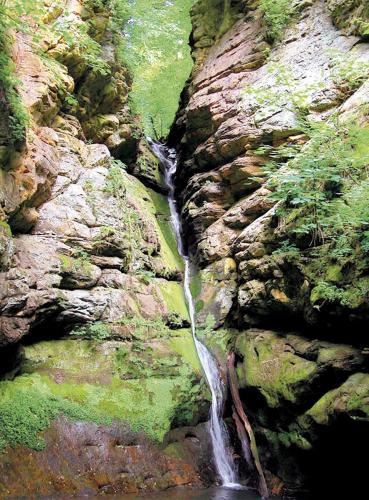 Mitchell Glen, a Green Lake landmark owned by the Sanitary District, supports the biodiversity of plants and animals, and provides ecosystem services. 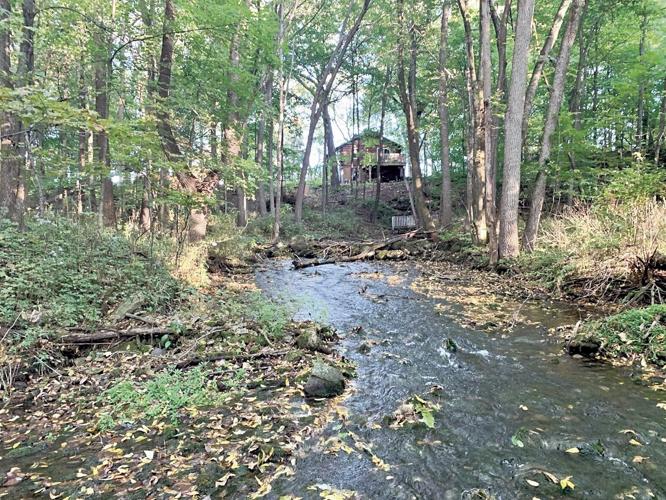 The source of Powell Spring pours out from the side of a limestone rock face, located just below the cabin shown  in this image. Powell Spring is dependent on groundwater and is located 2,000 feet from the proposed Skunk Hollow Mine.

In response to Green Lake County giving the initial OK for a mine near several environmentally delicate areas, three local organizations have banded together to appeal the county’s decision.

The Green Lake Association (GLA), the Green Lake Conservancy (GLC) and the Green Lake Sanitary District (GLSD) are appealing a conditional use permit for the Skunk Hollow Mine, which was awarded to Kopplin & Kinas Co., Inc.

“We are currently consulting with our attorney about where the appeal will be filed, but likely we will file before the Board of Adjustment, as the County’s website states that the Board decides appeals as a result of decisions of the County Planning and Zoning Committee,” said Erin Ter Beest of the Green Lake Association.

The proposed 40-acre limestone quarry will be located at the corner of County Highway K and Brooklyn G Road, one mile from the east end of Big Green Lake, if the plans approved by the Green Lake County’s Land Use Planning and Zoning Committee advance.

According to the GLA, the site of the proposed mine is roughly one farm field away from Powell Spring and Mitchell Glen, both of which are groundwater-fed, ecologically sensitive systems.

The three organizations aren’t opposed to mining in general. Rather, they are concerned about the selected site of the mine and its potential impact on the Green Lake watershed.

“We are asking for a fair, thorough process to review the proposal since so much is at stake,” Prellwitz said. “We cannot sacrifice short-term gains for permanent damage to our tremendous ecological assets.”

Kopplin & Kinas Project Manager Mike McConnell declined the Commonwealth’s request for comment regarding the appeal, but told the county at a July 7 public hearing that the location was selected because it contains a mineable limestone deposit, which is “extremely feasible to mine.”

He added at the hearing that Kopplin & Kinas intends to follow regulations from the state and federal governments, as well as not mine below the water table.

“The water leaving the site will be cleaner, when we implement this, than it is currently and it will stay that way when we are done because those measures will stay in place,” McConnell said. “It’s in our best interest not to mine into the water.”

Green Lake County also set conditions for the permit to be awarded, including studying for the presence of shallow groundwater and testing the limestone for sulfide, which will be reviewed by the DNR.

However, according to the GLA, nonmetallic mines have been shown to disrupt groundwater levels, negatively impacting conditions in surrounding springs and depleting local drinking water supplies.

Groundwater discharge near the proposed mine provides water flow to both Powell Spring and Mitchell Glen.

The GLA, GLC and GLSD also found records of sulfide minerals within bedrock in nearby parcels.

“These sulfide minerals do no harm when left alone,” Ter Beest said. “However, when exposed to oxygen — during mining operations, for example — a chemical reaction can be triggered that creates acid mine drainage that can cause fish kills in downstream waterways.”

In addition, the GLA said surface runoff from the mine site would drain toward White Creek and Dakin Creek, trout streams flowing to Green Lake.

To re-establish a brook trout population absent from Dakin Creek for more than 70 years, the GLA recently partnered with the DNR, Patagonia and nearby landowners

A DNR survey completed in July found that brook trout are now naturally reproducing in Dakin Creek, which the GLA says is a good sign for the fish species.

The GLA, GLC and GLSD are concerned that development pressure from the Skunk Hollow Mine, should it proceed, has the potential to jeopardize the restored brook trout population.

“Permanent protection of Mitchell Glen and Powell Spring have been important community projects, and we want to ensure they will be available for all future generations to enjoy,” said Melissa Curran, interim president of the Green Lake Conservancy.

Mitchell Glen is a protected site owned by the GLSD, known for its 40-foot waterfall within a sandstone gorge, as well as its unique flora and fauna.

Meanwhile, Powell Spring was recently acquired by the GLC, and contains a big cold-water spring that discharges water at approximately 4.5 cubic feet per second during the spring season.

“We understand the need for aggregate material in Green Lake County, but the problem is the location selected for the proposed quarry,” Sanitary District Administrator Lisa Reas said. “Mitchell Glen and Powell Spring are two unique properties that are our responsibility to protect.”

The lack of time between the public being notified of the Green Lake County Land Use Planning and Zoning Committee holding a hearing on the Skunk Hollow Mine and the hearing itself also was cause for concern from the GLA.

The Green Lake County Land Use Planning and Zoning Department notified only landowners within 300 feet of the proposed site via a letter two weeks prior to the public hearing, while two public notices were published in a local newspaper roughly two weeks and one week prior to the hearing.

During the July 7 hearing, neighbors expressed frustration over a perceived lack of communication as they received a notice just before the July 4 holiday weekend about the public hearing scheduled six days later.

“We contend that we did not have adequate time to coordinate site-specific studies to understand the full ecological impact of Skunk Hollow Mine — and the water resources surrounding it are too precious to hinge on a lack of information or a rushed process,” Prellwitz said.

The three environmental organizations have created a petition for those concerned about the proposed Skunk Hollow Mine, which is available at www.greenlakeassociation.org/skunk-hollow-mine.

“Green Lake and its surrounding watershed—including Powell Spring and Mitchell Glen — are exceptional resources to the community that the Green Lake Association, Green Lake Conservancy and Green Lake Sanitary District work tirelessly to protect,” Ter Beest said. “On behalf of these water resources, ecological treasures and the community, the three organizations are uniting to appeal the Skunk Hollow Mine conditional use permit.”