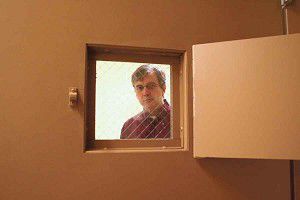 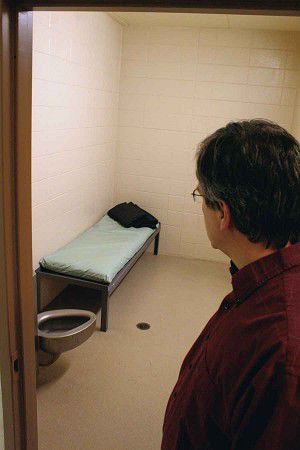 RIPON COLLEGE PROFESSOR Joe Hatcher peeks in at one of the holding cells at the Ripon Police Department. Ian Stepleton photo

RIPON COLLEGE PROFESSOR Joe Hatcher peeks in at one of the holding cells at the Ripon Police Department. Ian Stepleton photo

He felt the weight of thousands of pounds — of walls, gates, cement, metal bars — all around him.

Walking into prison for the first time made a strong impression on Joe Hatcher.

Granted, the Ripon College psychology professor hadn’t committed a crime; he was there as part of an internship, getting re-specialized as a psychologist.

But it didn’t make those first steps any easier.

“I was really cognizant of the walls and the barbed wire,” Joe said. “You really do hear the sounds of the doors closing behind you, the gates clanking.”

He wasn’t tempted to turn and run — not that he could have, anyway — but it was a harsh introduction to what would be a year-long internship, spread out at three area correctional centers.

Joe went to prison to help inmates understand themselves, and the world, better.

But for as much as the professor taught others in his prison visits, the greatest number of lessons may have been instilled in someone else: himself.

Most people spend a lifetime trying to keep from ending up behind bars.

Joe did everything he could to end up there — and almost couldn’t.

The path to prison for the professor started several years ago with a brainstorm.

For the past 15 years, Joe has been interested in peace studies. And for the past several, he’s thought about how he could further his research into the topic.

“I was talking to my wife,” he said, noting his wife is a clinical psychologist as well. “Suddenly on a Saturday morning I realized it’s peace work she does. So I thought, ‘That’s what I should do.’ ... We formed a five-year plan in about five minutes.”

The plan involved going back to school (even though Joe already had a doctorate) and being re-specialized as a counseling psychologist.

But that’s not as easy as it sounds.

It involved two years of commuting to the University of Wisconsin-Milwaukee while still teaching courses several days a week at Ripon College.

“The tricky part of this is you have to do a practical each week — it’s 15 to 20 hours a week, not counting driving time,” Joe said. “This is while I was working. It was a pretty hectic couple of years.”

And it only got more complicated from there.

To become licensed, Joe needed to take another step: take an accredited internship. And, to spend 2,000 hours at that internship, it meant leaving the college for a year on sabbatical.

But where would he do that internship?

“The whole time [I was thinking] if I want to do peace work, it sounds like corrections,” he said.

“My idea was to go work in a prison, and what I would do is help people not commit crimes,” he said, explaining, “Prisons are the biggest place where you find mentally-ill people. When they shut down large mental illness facilities ... it’s very easy to [end up committing a crime and go to prison].

And where large numbers of mentally-ill people can be found, psychologists aren’t far behind.

But to get into the prison wasn’t just difficult — it was nearly impossible for Joe.

For obvious reasons, officials were meticulous in deciding who was eligible for such a position.

At one point, for instance, Joe believed he had his internship all lined up, so he prepared the college community for his one-year departure.

Then he found out he’d need one more course before he could be allowed into the internship.

So he delayed his sabbatical and enrolled in the appropriate class.

Then the class was cancelled.

Joe thought he was sunk.

Fortunately, the accreditation group understood he’d made his best efforts to prepare for the internship, and allowed him to go forward with it anyway.

Transitioning to the prison environment wasn’t easy for Joe.

What he discovered was just how far from his comfort zone prison work actually was.

Read the full story in the Dec. 31, 2009 edition of the Ripon Commonwealth Press.