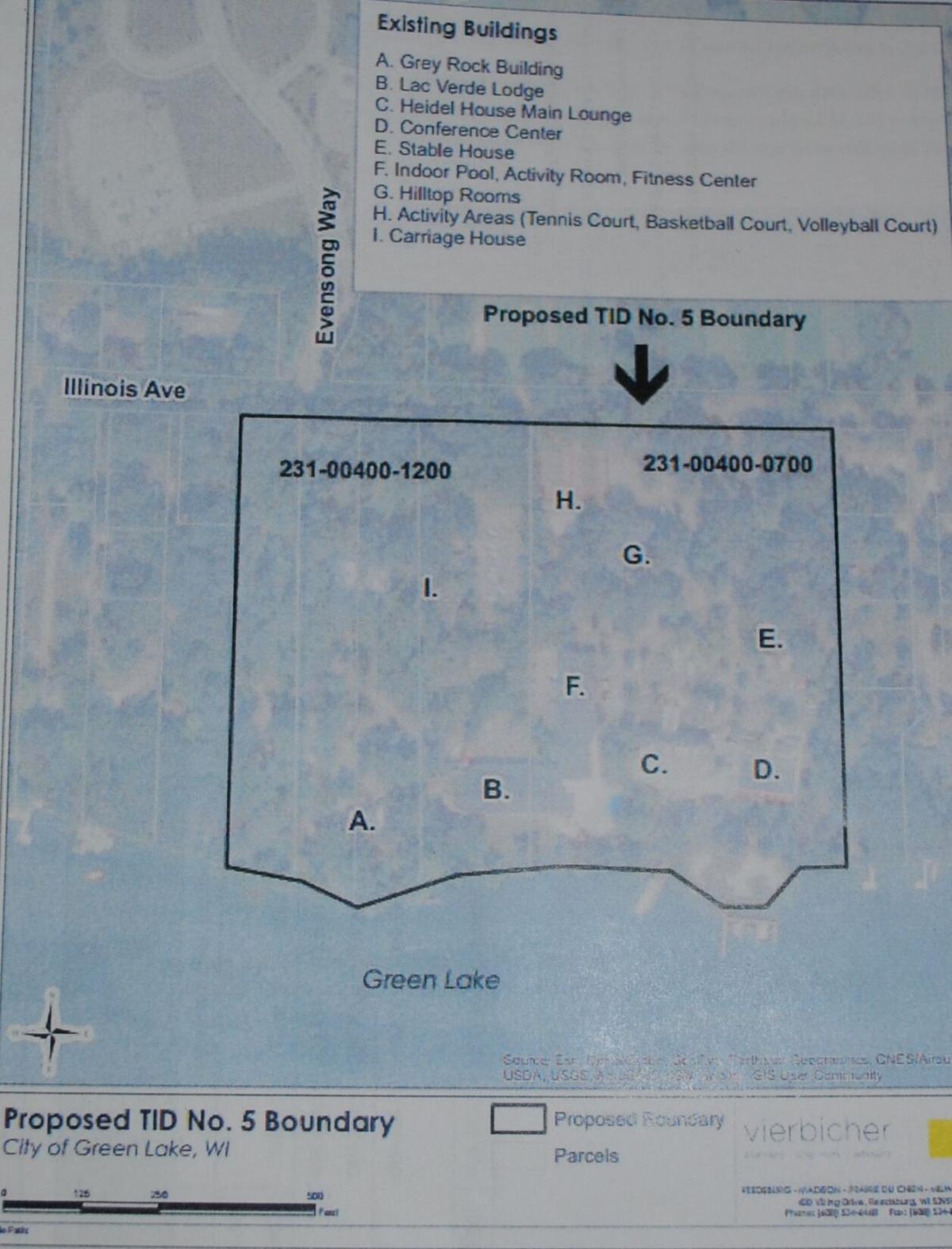 The proposed boundary for TID No. 5, along with buildings located within. 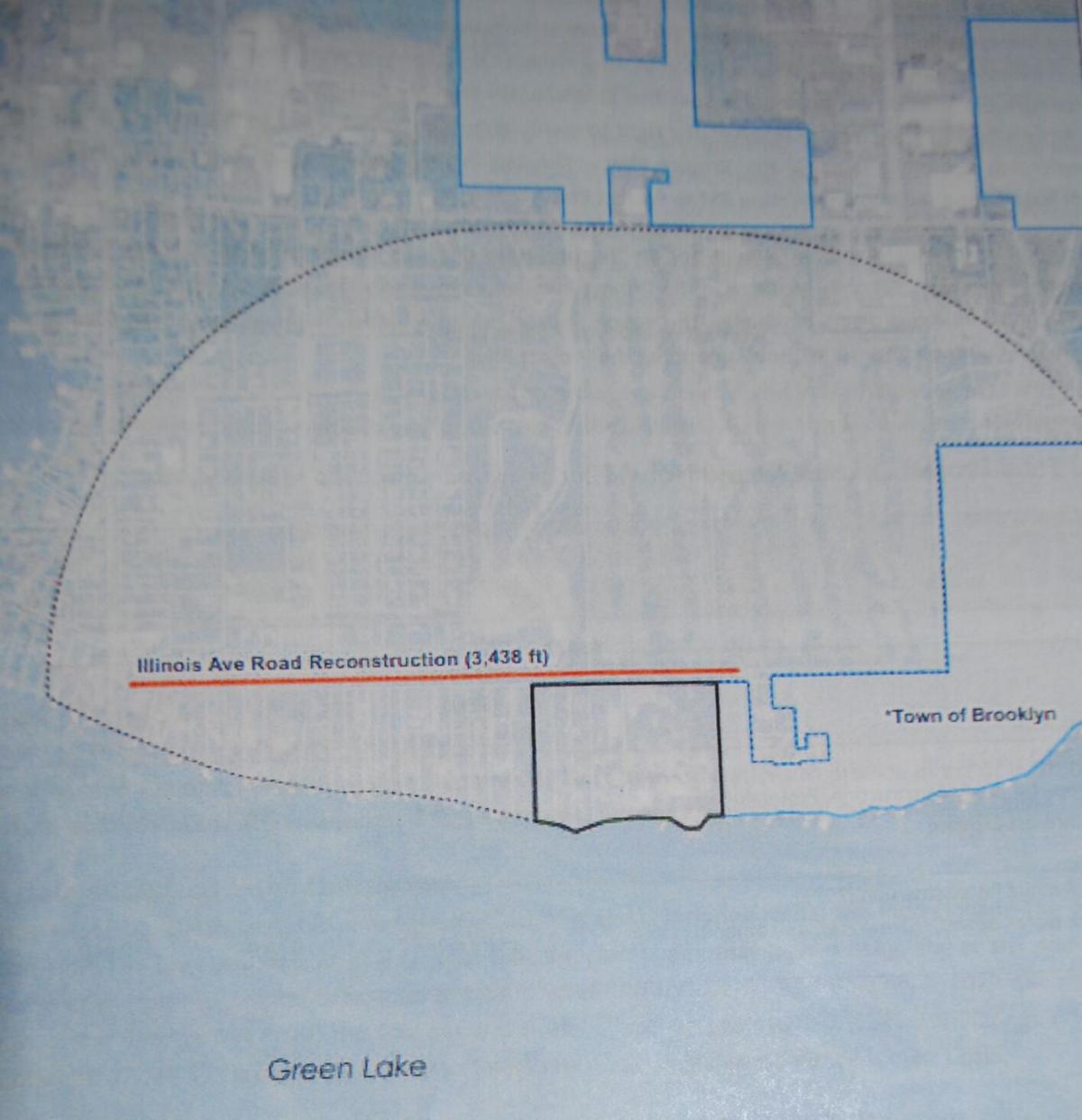 17% of the Illinois Avenue reconstruction project, marked in red, could be funded with revenues generated by TID No. 5. 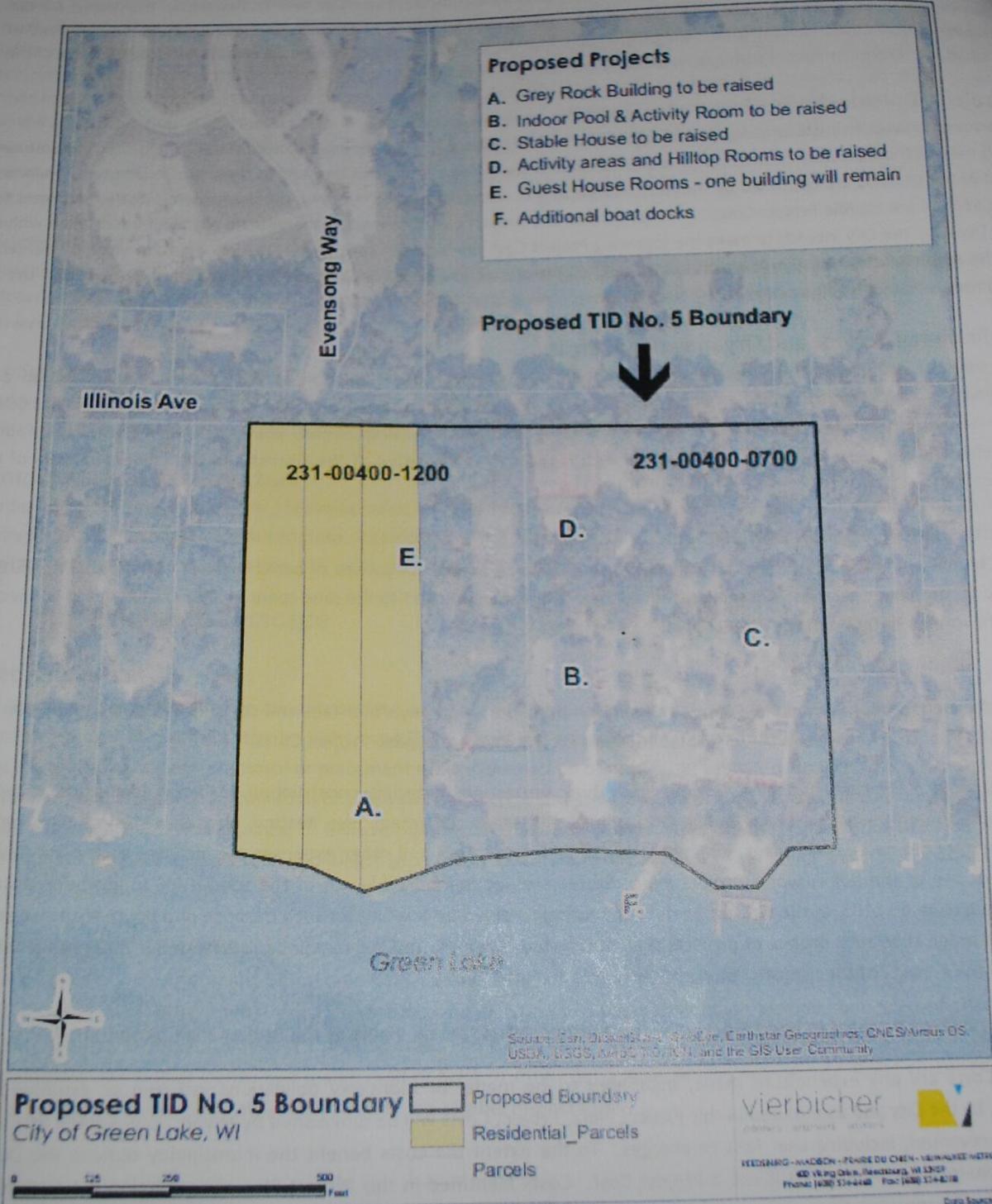 A map of TID No. 5 displays proposed projects and residential developments located within its boundaries. 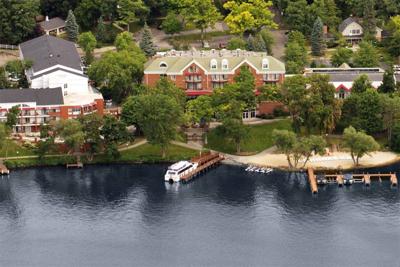 The closure of the Heidel House Resort & Spa in May 2019 left a hole in Green Lake’s tourism economy, but a plan to revitalize the property is beginning to take shape.

Green Lake Mayor Ray Radis announced Monday that Fiore Companies, the firm that owns the Heidel House property, has accepted an offer from Lighthouse Hotel Development Group and Green Lake Hotel Group LLC to purchase the property, which is expected to continue on as a resort.

“Closing is scheduled for mid-September with [a] Heidel House reopening target [date] of May 2021,” Radis said in prepared remarks delivered during the Plan Commission meeting that night.

The Evensong Spa property is not included in the deal, but Radis noted other firms are looking at the space for potential redevelopment.

On Monday, the Plan Commission unanimously voted on a motion to consider a proposed project plan for creating conservation-rehabilitation Tax Increment District (TID) that would encompass properties located at 653 and 643 Illinois Ave.

Prior to the decision, the city hosted a public hearing in which its financial advisor, Brian Della, gave a presentation explaining the draft project plan for TID No. 5.

Under the draft plan, for 22 years after the plan’s ratification by the Green Lake Common Council, the property tax value within TID would be frozen at “base property value” from Jan. 1, 2020, which is roughly $5.3 Million.

Any additional tax revenue generated by increased property values from redevelopment would need to be used to pay costs of redevelopment projects within the district.

“The amount of money available to help support the Heidel House redevelopment is based on the amount of improvement that’s going to be created from the development,” Della said. “Money could be spent on property acquisition, utilities, site prep, things like that.”

The draft plan stated that the city also could use additional property taxes to pay costs associated with other projects within a half mile of the TID, including 17% of the Illinois Avenue reconstruction project.

In addition, the draft plan marked off three areas within TID No. 5 that would be used for future residential development.

To make the area “suitable for development,” the plan says the city needs to make a “substantial investment” to revitalize the Heidel House property, as roughly 50% of the property “is in need of rehabilitation.” “In this particular TID, because it’s only two parcels, 18.3 acres, the entire property is in need in rehabilitation,” Della said.

The draft plan projects the city to invest roughly $3.3 million towards redevelopment that it intends to finance through general obligation bonds. It can use other financing methods to preserve debt capacity, mitigate risk and potentially lower project costs.

Della noted the city is working to apply for a $250,000 grant from the Wisconsin Economic Development Corp. (WEDC) to use toward redevelopment.

By helping developers finance redevelopment, the draft plan says developments and improvements inside the TID would amount to about $12.7 million, in addition to other economic benefits such as “increased employment, business and personal income.”

According to the draft plan, creating a TID is necessary because “the development expected to occur is unlikely to take place” without doing so. The plan added the redevelopment will “generate economic benefits that are more than sufficient to compensate for cost.”

“I think the Heidel House is valuable in ways that are clearly not measured by the value of the tax increment generated,” Della said. “The Heidel House helps generate $200,000 a year in room tax revenues, and that’s not to mention supporting all the local businesses by making Green Lake an even more vibrant place for visitors.”

Even so, a final developer’s agreement needs to be approved by the Common Council and the council still needs to ratify TID No. 5 for the redevelopment to occur.

“Money is not going to be released from the city until we have a new Heidel House that’s up and running,” Della said. “At that point, the redeveloped Heidel House is going to be worth a lot more than the loan on that property.”

Following the Plan Commission meeting, the Common Council went into closed session to further discuss the project in private. Officials declined to comment on what was discussed in the closed session.

A special Common Council Meeting regarding the approval of TID No. 5 is scheduled for Monday, Aug. 24.