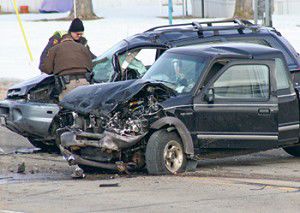 Two vehicles were severely damaged Monday in a crash that killed one and injured another. 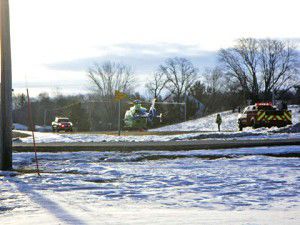 Two vehicles were severely damaged Monday in a crash that killed one and injured another.

Sun may have been a cause in a two-vehicle crash Monday morning that killed a Green Lake woman, and that sent a Ripon man to the hospital via an air ambulance.

Sharon Leu, 71, died on scene due to injuries sustained in the crash, which occurred on Highway 23 near the intersection with Forest Ridge Road.

Meanwhile, John Duenkel, 38, was taken by ThedaStar helicopter to Theda Clark Regional Medical Center in Neenah, where family members said he was doing as well as could be expected.

“John is doing OK,” said Laura (Duenkel) Workowski, his sister and a fellow Ripon resident. “He has some minor injuries and is in a lot of pain right now.

“He is having a hard time dealing with a life being lost. If all goes well tonight he is scheduled to be released [Tuesday].”

It’s not entirely clear what led to the accident, which occurred Monday at just after 7 a.m.

“As of this morning [Monday], we did not have any [witnesses] — no direct witnesses” to the crash, said Mark Putzke, chief deputy sheriff with the Green Lake County Sheriff’s Department. “The cause of the accident is still under investigation.

“We believe that the sun may have been a factor, but it’s still under investigation.”

Otherwise, the course of events that led up to the crash were relatively simple.

“The victim, Ms. Sharon Leu, left the Coachlight [Mobile Home Park driveway] to drive out onto State Highway 23 eastbound,” Putzke said. “A westbound pickup then collided into her driver’s side.”

Read the full story in the March 28, 2013 edition of the Ripon Commonwealth Press.