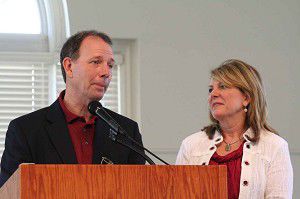 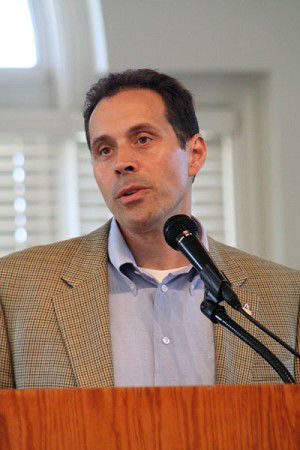 Several times Ripon College President David Joyce had to fight through tearing eyes as he spoke.

“[Coming to Ripon] was the best decision of my life,” he said, “and I mean that with all honesty. And now I’m getting choked up.”

It was Joyce’s chance to tell in person his adopted family that he will be leaving after the fall semester to become president of Brevard (N.C.) College.

Though the silence was punctuated by a standing ovation for Joyce at the end, it was an emotional 45-minute chat; before and afterward multiple people stated how sorry they were to see Joyce leave.

The talk gave them a chance to hear what steps the college will take toward securing its next president as well.

Meanwhile, in a day of announcements, it also offered vice president and dean of admission and financial aid Steve Schuetz a chance to say goodbye as well.

He is leaving in a few weeks to become vice president for enrollment at Concordia College in Moorhead, Minn.

“We’re here to assure you this will be a smooth transition,” said Bob Kirkland, board of trustees chairman, of the presidential succession. “Jerry [Seaman, college vice president and soon-to-be interim president] was selected by a unanimous vote by the board of trustees [last week Tuesday]. The board has great confidence in Jerry.”

Read the full story in the July 28, 2011 edition of the Ripon Commonwealth Press.