This graphic illustrates the Rosendale-Brandon’s master plan for its facilities, which would close Rosendale Primary, turn Rosendale Intermediate into Rosendale Elementary and expand Laconia to house grades 6 to 12. 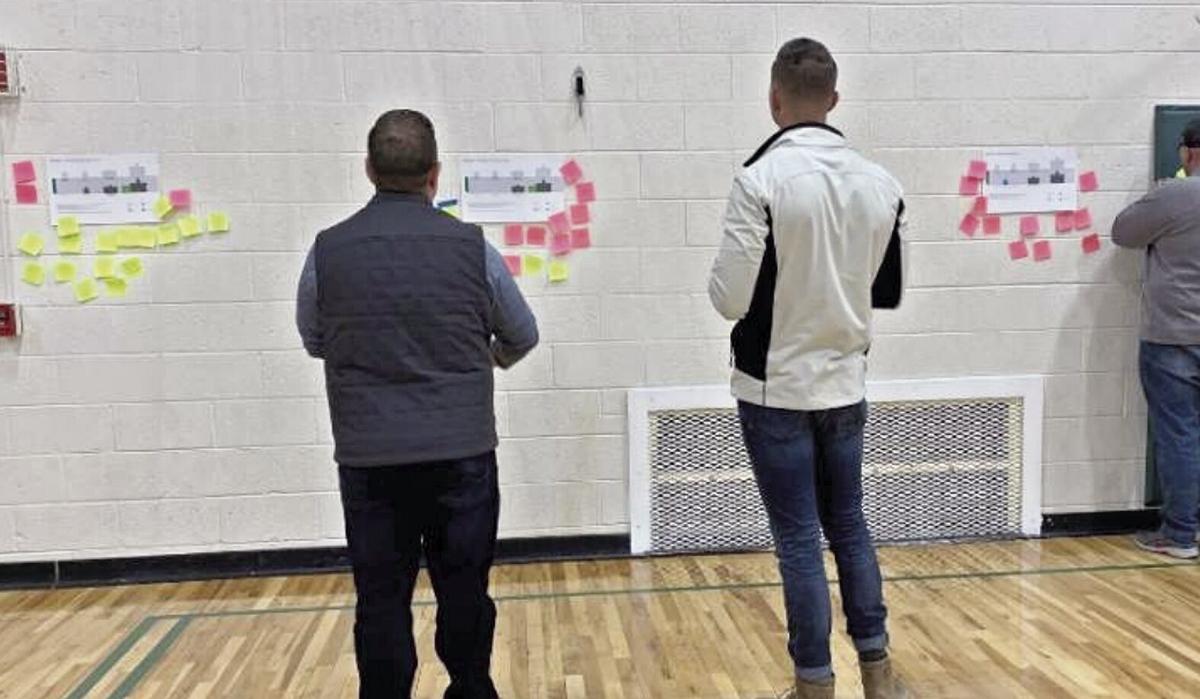 Members of the Rosendale-Brandon Facilities Advisory Committee provide feedback on multiple plans for district facilities with green post-it notes for pros and red for cons.

This graphic illustrates the Rosendale-Brandon’s master plan for its facilities, which would close Rosendale Primary, turn Rosendale Intermediate into Rosendale Elementary and expand Laconia to house grades 6 to 12.

Members of the Rosendale-Brandon Facilities Advisory Committee provide feedback on multiple plans for district facilities with green post-it notes for pros and red for cons.

To do that, however, the district will need voters to approve a referendum for facilities upgrades.

Those recommendations came from the district’s Facilities Advisory Committee (FAC), which presented its findings to the Rosendale-Brandon School Board last week Monday after months of work.

The proposal would modernize each district facility, while closing Rosendale Primary School and sending those students to the Rosendale Intermediate building, which would be renamed “Rosendale Elementary.”

Weber said many middle school and high school teachers work at both Laconia and Rosendale Intermediate already, so combining the facilities makes sense as it enables them to drive less and it allows for shared tech ed and agriculture facilities.

“It provides an opportunity for our middle school and high school kids,” Weber said. “We can invest in materials and learning spaces that best meet their needs, and give them the most opportunity.”

The plan would require a referendum as the “base” project cost is $29 million and the “expanded” project cost is $36 million, with the bulk of the costs coming from the expansion to Laconia, according to the FAC presentation.

According to RBSD, the cost of the base project is equivalent to an estimated tax increase of $196 for each $100,000 of a home’s property value and would result in a mill rate below the district’s 2012 level.

RBSD will send a community survey to families, which will gauge interest in a referendum and either the $29 million or $36 million expansion.

If families show no interest in a referendum, regardless of size, the district would look to complete maintenance on its buildings.

“The School Board is going to look and see the responses and what people are asking for, to decide if we’re going to go to referendum in April or not,” Weber said.

He added that most of the district’s school structures were built in the 1950s, ’60s and ’70s — with the exception of Rosendale Intermediate, which was built in the ’90s — meaning there’s a lot of infrastructure that has “outlived its usefulness.”

For example, at the high school, there are classrooms that are shaped like triangles, and in the elementary school there isn’t space for supervised group work, so kids work in small groups out in the hall, Weber noted.

“Square-footage wise, they’re fine, but it’s not a user-friendly space,” he said. “We want to modernize our environment to meet the learning and teaching needs of our students and staff.”

To determine the best way to move forward with its aging infrastructure, the district formed the FAC in January to develop a master plan for district facilities.

RBSD operates four schools for roughly 950 students and has been seeing enrollment drop for the past 13 years.

It anticipates residential enrollment to decline at a slow, steady rate for the next decade, which is one of the reasons the district is looking to close Rosendale Primary and expand Laconia for middle school and high school students.

Multiple options were explored, which included closing Brandon Elementary and Rosendale Primary to construct a new facility for all elementary school students.

Weber said the plan to preserve Brandon Elementary, convert Rosendale Intermediate into Rosendale Elementary and expand Laconia to accommodate grades 6-12 was determined to be the most popular option for communities to keep everyone happy.

“The committee explored just having two buildings, but — knowing the impact of having a community lose their school entirely — from the onset, that’s something we didn’t want to happen,” he said.