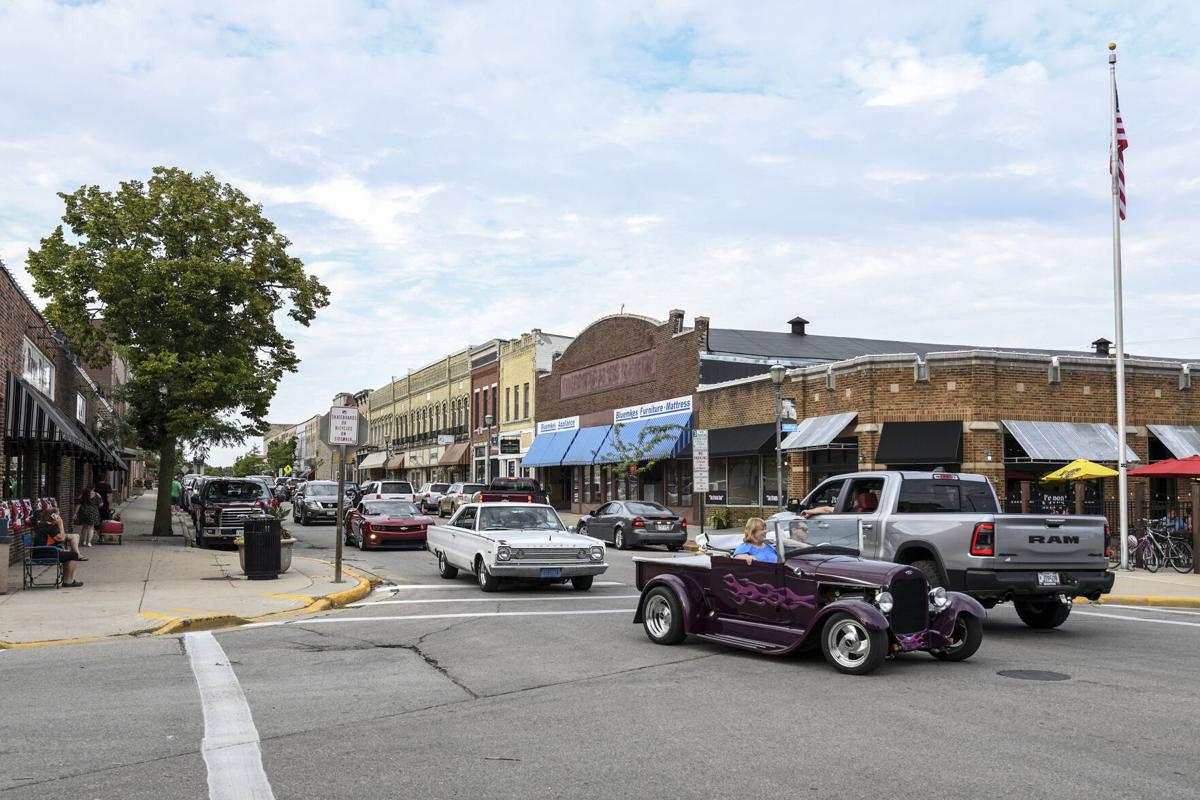 Cars pass each other going opposite directions down Watson Street during the 2019 Scoop the Loop event. The event returns Saturday. 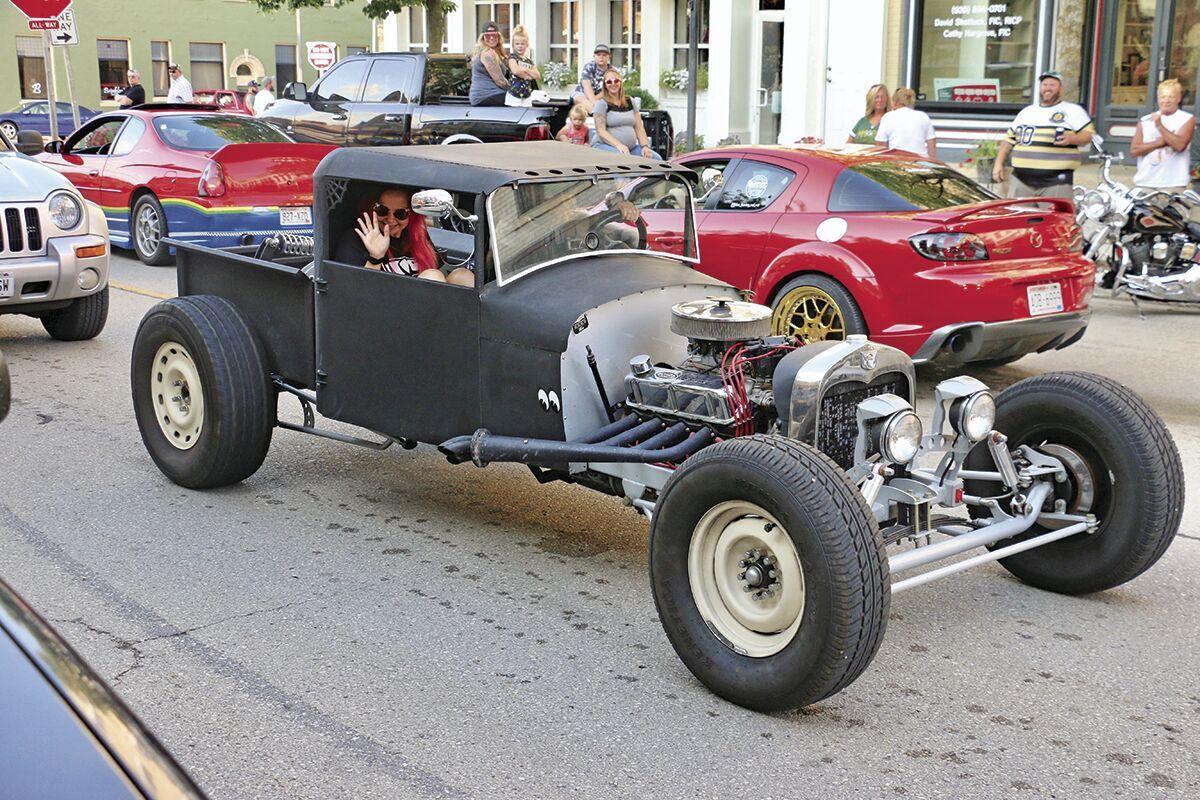 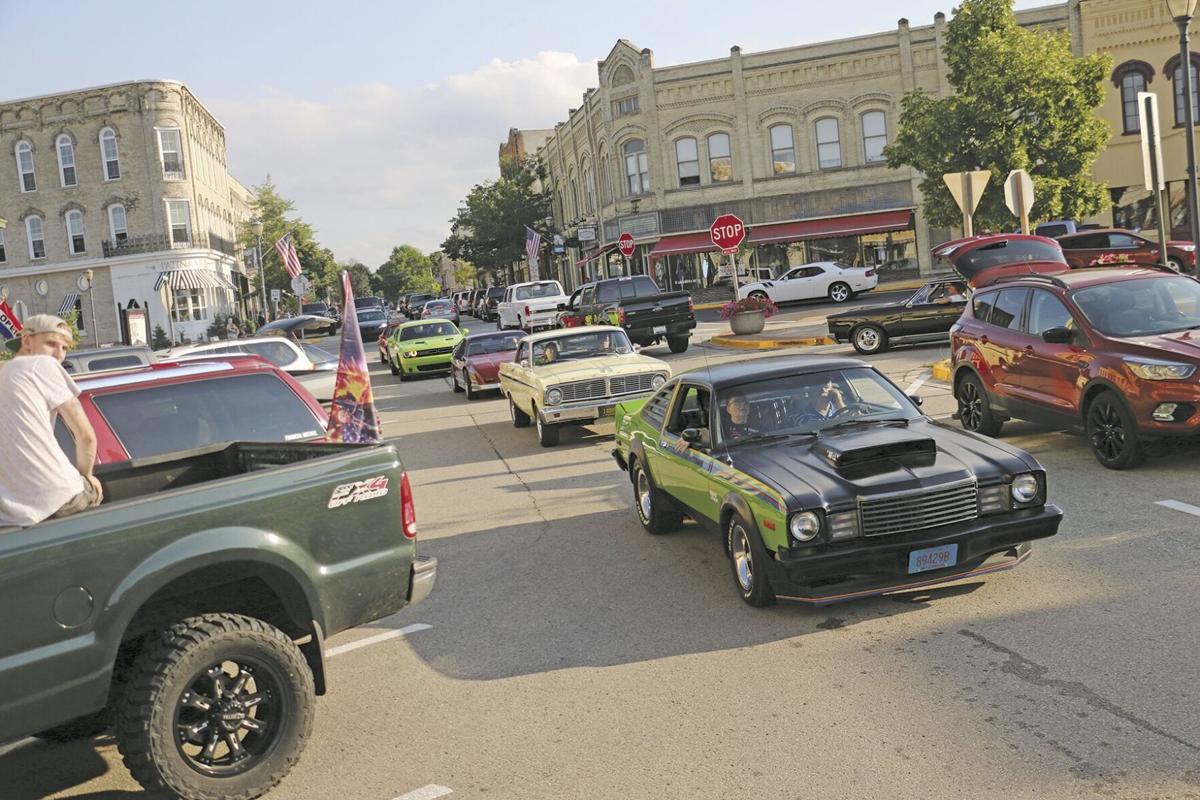 Vehicles both new and old Scoop the Loop in 2020.

The sound of roaring engines and the smell of exhaust will once again fill downtown Ripon Saturday as cars “cruise” up and down Watson Street to welcome back a time-honored tradition.

The third-annual Scoop the Loop event returns Saturday from 5 to 8 p.m. During the event, Ripon Main Street, Inc. Executive Director Craig Tebon says multiple stores will be open to “provide an adequate dose of retail therapy.”

Those “scooping the loop” are expected to follow all Wisconsin traffic laws. Burnouts are expressly prohibited, and citations will be issued to those failing to comply as cameras will be in place monitoring traffic on Watson Street.

In addition, the event will feature an outdoor showing of “Raiders of the Lost Ark” on the Village Green at approximately 8:30 p.m. During the outdoor movie, sponsored by Nevitt Law Office, participants may bring lawn chairs or blankets to sit on.

For decades, “scooping the loop” was a ritual for many Riponites, bringing local residents together to drive their vehicles through historic downtown Ripon and meet up with friends.

When scooping the loop, individuals would drive their cars down Watson Street before cruising around Rotary Square and back down the opposite end of the street.

Over the years, Tebon said powerful memories and lifelong relationships were forged during the “unique social gathering.”

Despite the fun created by scooping the loop, a few miscreants eventually brought about the activity’s downfall.

Tebon explained that scooping the loop caused traffic issues and, at the time, brought some unruly characters to downtown Ripon, which resulted in street fights.

“It turned into a problem and Ripon ended up having to babysit people,” he said.

For those reasons, and more, Tebon says the city of Ripon banned scooping the loop in 1992.

The activity was thought to be a thing of the past for many years.

But, after a downtown fire had taken the wind from the community’s sails in the 2010s, local leaders began brainstorming ways to boost excitement and enthusiasm downtown, Tebon said.

They ultimately decided that finding a way to revive scooping the loop was the best way to achieve their goal, the Main Street manager noted.

“Scooping the loop was one of those things that most people had fond memories of,” Tebon said. “We were just looking for the right time to bring it back.”

In 2019, downtown business owners brought the nostalgia back for what Tebon describes as “one glorious evening” that proved to be a “tremendous success.”

When the event returned last summer, it again received a warm reception from many in the community.

“It’s no different than it was 30 years ago,” Tebon said of the reception Scoop the Loop has received. “For the most part, everybody enjoys the event.”

While the Scooping the Loop injects a bit of nostalgia into the community, it’s hard to quantify the event’s economic impact, Tebon noted.

He said the restaurants do better than many of the retail businesses during the event because people like to grab a bite to eat amid the event.

The Main Street manager added that A&W Restaurant was a favorite stop among individuals scooping the loop before the activity was banned and it has remained a favorite during the events in 2019 and 2020.

Because additional visitors are expected to be in town during the event, Scoop the Loop aims to showcase the progress made toward revitalizing Ripon’s downtown, the Main Street manager noted.

“It’s nice to have this event when people are coming to town because — a lot of times — people are like, ‘Wow, Ripon has really changed,’” Tebon said. “And, they like what they see. ... We still have work to do downtown toward revitalization, but we’re making progress.”

In fact, to tie into Alumni Weekend, “Raiders of the Lost Ark” was chosen for the outdoor showing because Harrison Ford went to Ripon College in the 1960s.

That’s where Ford discovered acting when he “donned a fake mustache and starred in ‘The Skin of Our Teeth’ in Ripon’s Red Barn Theater,” according to Wisconsin Life, a coproduction of Wisconsin Public Radio and PBS Wisconsin.

“It’s kind of cool to say, ‘Harrison Ford will be in Ripon,’ even though he won’t be here in person, he’ll be here on the big screen,” Tebon said.

Although the event has largely received positive feedback, the actions of a few could jeopardize the event’s longevity.

“If you go back and look at the reasons the cruising ordinance was enacted, it was because of a small group of people who ended up ruining it for everyone else,” Ripon Police Chief Bill Wallner told the Commonwealth after last year’s event. “The behavior that occurred during the cruise is exactly the same issue. There was a large crowd out, there were a lot of people involved, but a small group that wanted to engage in the type of behavior that is going to end up causing some serious questions.”

To try to limit problems from last year’s event, Tebon said Scoop the Loop is ending an hour earlier this year.

He added that the actions of a few have the potential to cancel future iterations of the Scoop the Loop event.

“Please follow and obey Wisconsin traffic laws; those who choose not to will be subject to fines,” Tebon said. “We’ll have video and we’ll have officers downtown. If it gets out of hand, this event might not be back next year. Let’s keep it fun, so we can do it again next year.”

Check out what's happening in and around Ripon this weekend: Concerts, Scooping the Loop, county fair and more

There’s a ton of fun happening in the Ripon and Green Lake areas this weekend as summer is in full swing.