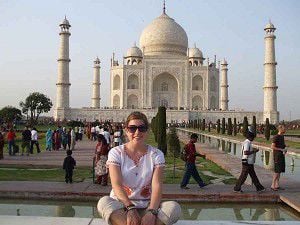 Abby Yeomans sits in front of the Taj Mahal. 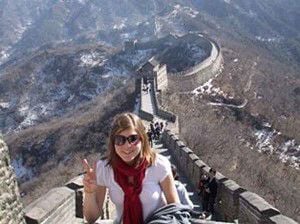 Abby Yeomans sits in front of the Taj Mahal.

Editor’s note: This is part two of two about Green Lake’s Abby Yeomans’ trip around the world with Semester at Sea. Part one was printed in the July 22, 2010 edition of the Commonwealth.

After a brief stop in Hawaii, Abby Yeomans was ready to make her first foreign port of call.

Yet, when Abby arrived in Japan, it wasn’t with the same kind of anticipation she had for other ports to come.

But Japan quickly won her over.

“It was so technically advanced, and it was very clean,” she said. “The culture is very interesting and very advanced and futuristic ... I love Japan; it’s absolutely beautiful.”

Here, she visited Kyoto and Tokyo, discovering the latter to be “like Times Square on steroids,” while the former felt more traditional.

After visiting Japan, she thought China would be quite similar. Abby was wrong.

“It’s very overpopulated,” she said, adding it was dirty and filled with smog.

Beijing, she said, was somewhat better.

“That was amazing; I loved it up north,” she said.

There, she visited the now-famous Birds Nest stadium, Tiananmen Square and the Great Wall.

“I liked it a lot, but it was my first big culture shock,” she said.

More would be on the horizon.

Read the full story in the July 29, 2010 edition of the Ripon Commonwealth Press.