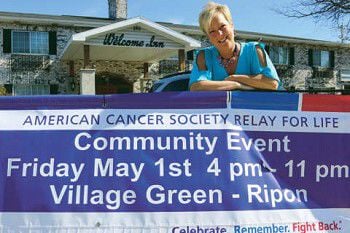 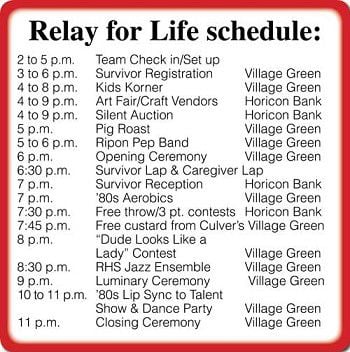 “When I first found out, I considered it a death sentence.”

“I have a mammogram every year and I always have to go back for more tests, so it wasn’t really that surprising that I had to get called back,” Aither said. “When I did get called back ... they told me they found some cancer.”

Aither will share her story of being diagnosed with — and surviving — cancer Friday, when she speaks during the opening ceremony of the 19th-annual Relay For Life of the Ripon Area.

The event will take place from 4 to 11 p.m. at the Village Green in downtown Ripon and features a 1980s theme in honor of the first-ever Relay For Life in 1985.

Activities begin at 4 p.m., but the opening ceremony and Aither’s keynote speech won’t be held until 6.

It will be followed by the Survivor Lap and Caregiver Lap at 6:30 p.m., the Luminary Ceremony at 9 and the Closing Ceremony at 11, among other events.

When Aither takes the stage to tell her story Friday, she will do so having come to terms with a disease that could have taken her life.

Yet, it hasn’t always been easy for her. When she learned she had breast cancer, the news hit her hard.

Both of her mother’s sisters and all three of her first cousins passed away from breast cancer.

“I was totally freaked out, obviously, because all the women in my family who have ever gotten it have died from it,” Aither said, adding one of her aunts died at the age of 32 with two babies, while another fought it for more than 30 years.

Knowing this, she chose to treat it aggressively.

Aither underwent a 13-hour double mastectomy procedure on May 23, which was her 44th birthday, in Madison and spent two nights in the hospital before being released.

Read the full story in the April 30, 2015 edition of the Ripon Commonwealth Press.