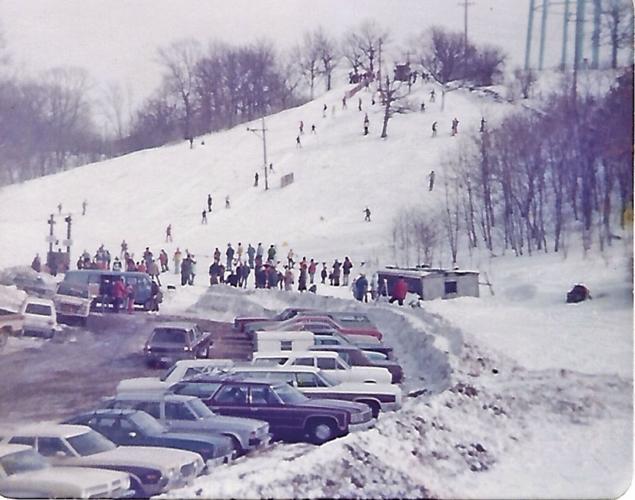 An undated photograph of Kiwanis Park ski hill shows it being a popular place. 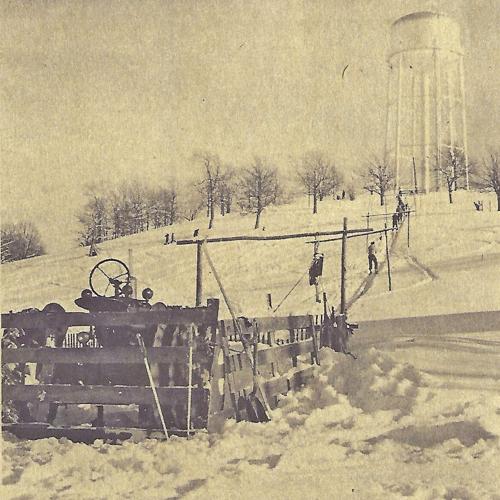 This photograph shows the early days of Kiwanis Park ski hill when a tractor at the bottom of the hill generated the power to run a tow rope. In the later years, an engine was placed in a building at the top of the hill and power poles added for the tow rope wires. 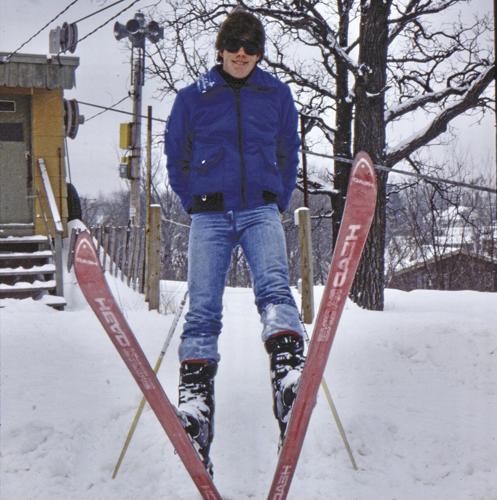 Al Woolley, who lived on Hillside Terrace, is seen enjoying Kiwanis Park ski hill in 1981. This is after an engine which operated the rope tow was installed in a building, shown to the left in the photo, at the top of the hill.

Kiwanis Park is well-known for being a sledding hill in Ripon and children and families can be found enjoying it during the winter months. At one time, the hill also was known for skiing.

The Ripon Noon Kiwanis Club, which started in 1924, purchased about 9.5 acres of land for $1,000 (equal to $10,934 in 2020) in 1949. Located near the present city water tower, the park can be accessed from a trail near Howard and Thomas streets. In 1991, about five acres of the park were sold for home development. Before that time, the hill had access from Hillside Terrace on its northern side.

In August 1949, Kiwanis members moved a shelter building from Ceresco Park to the bottom of the hill. This was used as a warming house, as well as a place to sell coffee, hot chocolate and sandwiches.

Glenn Butters (1931-2002), a Ripon K-8 physical education teacher, wrote his master’s degree thesis on developing a community ski hill in Ripon. Butters had graduated from Ripon College and returned to Ripon to teach after having served in the military and teaching in another school district. His thesis was used as the basis for the revitalization of the ski hill in the mid-1970s. The ski hill became a reality when the Behms, summer visitors to Ripon from California, left $5,300 (equivalent to $24,568 in 2021) in their will for the development of the hill.

Kiwanis member Bill Mason (1906-1988), who owned Vogue Cleaners in Ripon, was the chairman of the Kiwanis Park Committee and became a driving force for the improvement of the ski hill. He was assisted by Jerry Long (1937-2011) and other Kiwanis members. Both Mason and Long’s sons John and Ron, respectively, also were involved with the hill.

The Feb. 15, 1978 Ripon Commonwealth Press reported that in 1976, “Fill was brought in and dumped to rebuild some sections of the slopes, and contouring and grading work was completed.”

The original slope of the southwest side was flattened in order to allow for different ability levels. In that way, one side of the hill could be utilized as a type of bunny hill because it was not as steep as the northern side. That summer, volunteers also helped to clear brush to expand the skiable area.

Wisconsin Power and Light ran electrical power onto the hill so that an engine to operate the tow rope could be placed in a small building volunteers had built at the top of the hill. Wisconsin Power and Light also supplied and placed electrical poles at no charge for the tow rope wires. A used rope tow motor was purchased for $1,000 ($4,63.55 today) from Skyline Ski Hill in Adams-Friendship, Wis. The Skyline staff also helped splice the tow rope and provide insight on safety measures. The rope tow was assembled in the summer of 1976 with help from Ripon Lions Club member Milton Oakes (1920-2005). Oakes had welded for the Soo Line Railroad for 30 years and taught welding at Fond du Lac Vocational School. A new warming house, which was an old ice shanty with electric heaters, was added to the bottom of the hill.

The hill, which had two 500-foot runs, was ready to open in the winter of 1977, but there was a lack of snow that year. Instead, it opened in the winter of 1978. Water also was added that year so that a snow gun could be utilized to make snow. A converted tractor and snowmobiles were used to groom the hill. By the time the hill opened, the Ripon Noon Kiwanis had spent $21,000 (equal to $86,999 today) on the ski hill project.

There was no official Ski Patrol, however, a February 1978 Ripon Commonwealth Press reported that there was “a ski patrol staff of ten persons, mostly high school students, trained under the direction of Kiwanian Tom Zoellner, a National Ski Patrol member.” John Mason remembered that in later years local teenagers were trained in first aid and practiced using a toboggan to carry injured skiers. They were known as the “Safety Patrol” as they were not certified Ski Patrol members.

“A lot of people donated things to make the whole operation go,” said Bill Neill, who joined the Kiwanis in the early 1970s.

Neill also noted that it took a lot of volunteers to run the hill,

“Kiwanis needed about three members to run the hill, one at the top of the tow rope, one at the bottom and one in the warming house to sell tickets,” he said.

Women were not allowed into the Kiwanis until 1987, so only men ran the hill.

“Although, however, my wife Judy and our neighbor Jean Woolley knew how to run the tow rope and would sometimes open the hill after school if the snow was good,” Neill said.

Woolley added that she and Judy Neill also enjoyed using the hill since they could ski all the way to the rope tow from their backyards.

In 1978, the cost to use the hill was $1.50 per person, per day and a family season pass was $30. The hill was mainly open on weekends. Woolley, whose children skied the hill, noted that, “The tow rope provided an issue for some of the smaller children. Some were so small that they would lose contact with the snow, skis and all, in spots where the terrain dipped under the tow rope.” She added that “Older heavier kids would grab the rope just behind the little ones, holding the rope down for them. At the end of the ride was a narrow horizontal bar, which would trip and stop the tow if someone neglected to get off prior to reaching it.”

For a couple of years there was a Snow Carnival held on the hill with ski races for both downhill and cross country skiing.

“It was a big deal with 75 to 80 people showing up, Neill said. “It took a lot of volunteers and after a couple of years of not having enough snow it died off.”

In the summer of 1980, the Kiwanis Club proposed that the city of Ripon take over the operation and maintenance of the hill while Kiwanis retained ownership of the land along with providing capital maintenance and volunteers to assist. It was estimated that the cost to the city would be a minimum of $7,500 per year (equal to $23,686 in 2020).

Ron Long was hired in the winter of 1981 as a part-time ski hill supervisor. His wages were paid for by the city. However, the city never ended up maintaining the hill. The ski hill closed in the 1980s due to the number of people needed to run it each weekend and the lack of enough snow in various years.

There were some years the hill was only able to open for a few days due to weather and snow conditions.

Due to the dedication of Bill Mason, the hill was named “William Mason Hill” in 1988. A piece of the rope tow still is in use for the delight of children as it now holds a tire swing in the backyard of Mason’s son, John, who has many fond memories of the hill.