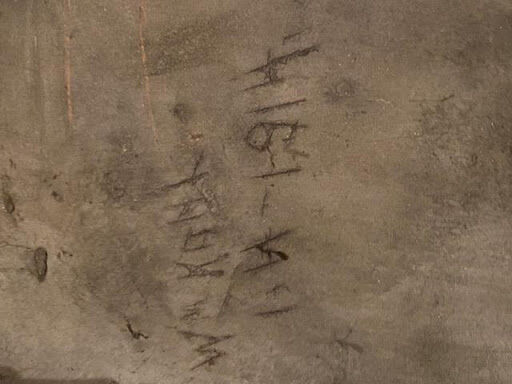 William Kohl (1857-1939) had a cement business in Ripon and signed his name on a cement cistern found in the basement of 121 Watson St. 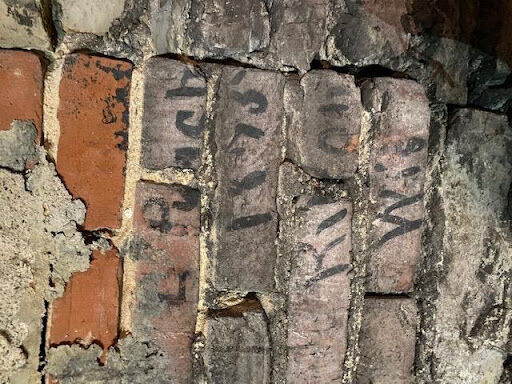 Although there were two men named “L. Pynch” in Ripon, it is believed that Louis Pynch (1859-1935), signed the basement wall of 121 Watson St. Pynch was in the produce business and the building once housed a grocery store.

William Kohl (1857-1939) had a cement business in Ripon and signed his name on a cement cistern found in the basement of 121 Watson St.

Although there were two men named “L. Pynch” in Ripon, it is believed that Louis Pynch (1859-1935), signed the basement wall of 121 Watson St. Pynch was in the produce business and the building once housed a grocery store.

In a community like Ripon there is history to be found everywhere, even underground.

On a recent visit to Edward Jones at 121 Watson St., owner Greg Dragolovich was happy to show volunteers from the Ripon Historical Society around the basement of his building.

Dragolovich’s father, Dennis, first started leasing the building in 1986 and then the family purchased it in 2009.

Built in 1878, this address is located in the Watson Street Commercial Historic District and is listed on the National Register of Historic Places.

The National Register paperwork from 1991 notes that “The Zobel Brothers Block replaced a smaller store that had survived the 1869 fire, but not the 1875 fire that also took its neighbor to the south (123 Watson Street).

Built for the Zobel Brothers grocery store, by 1909 this building was the drug store of Ottmar Schallern. It remained a drug store until the mid-20th century, then housed a number of businesses.”

In touring the basement, one can see that the current building was built on the foundation of the former building. Scratched into the cement of the corner water cistern is the name “Wm. Kohl” and the year, 1914.

He was in the meat business for a number of years and then became a cement contractor along with operating a stone and gravel quarry. Kohl laid many of Ripon’s cement sidewalks which still bear his name. He was a city street commissioner, served on the city council, the city fire department, and on the county highway commission.

They had a daughter, Clara, and two sons, Fred (who owned Kohl Hardware in Ripon) and Ceylon. William Kohl is buried in Hillside Cemetery.

On the north brick wall in black paint is “L. Pynch, 1875, Ripon, Wis.” It is a more difficult to identify Pynch as there were two men named L. Pynch in Ripon.

The first was Lewis Pynch (sometimes spelled Pinch) who was a tailor in Ripon. Ripon Historian Sam Pedrick (1868-1963) noted in his genealogy notebooks, “I remember Lewis Pinch. He was a small man, very religious, especially when in his cups. He would hire halls and give lectures on the subject of the use of liquor, defending it from Bible texts.”

Lewis Pynch appears in the 1860 census as living in Ripon and in the 1876 directory of Ripon, so we know that he was in town around the time the basement wall was signed.

The second L. Pynch is Louis Pynch (1859-1935) who moved to Rosendale in 1861 and later to Ripon. He was in the produce business first with his brother and then with J.J. Powers as the Ripon Produce Company. He later became sole owner of the business.

He served on the city council, school board, and was a director of the Ripon Telephone Co. and the German National Bank. He married Lois Welcome in 1887 and after she died in 1892 he married Elizabeth Dudley (1873-1956) and they had two children. Louis is buried in Hillside Cemetery.

It would seem that since Louis Pynch was in the produce business he would sign the basement wall of a grocery store, although he would have only been 16 years old at the time.

Look forward to more Ripon Now and Then columns about Ripon’s underground history.