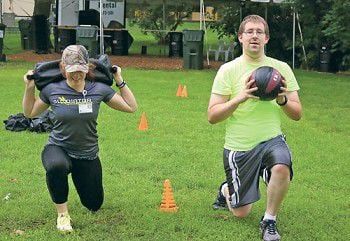 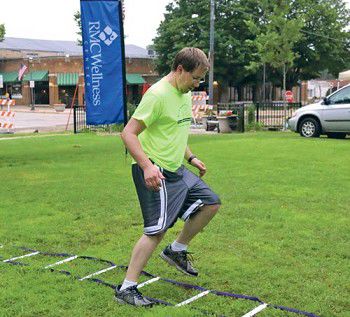 Reporter Jonathan Bailey steps in and out of the rungs during a ladder agility drill.

Reporter Jonathan Bailey steps in and out of the rungs during a ladder agility drill.

Heading to a fitness boot camp last week Saturday morning, I thought the only kick in the butt I would be receiving is waking up before 8 a.m. on one of my few days off.

I was in for a rude awakening.

When I arrived at the Village Green in Ripon just a few minutes prior to the 8 a.m. start, I saw two people — both of whom were much more fit than me.

One was Katie Coughlin, instructor of the boot camp, which was organized by the Ripon Medical Center (RMC) Wellness Center.

The other was fellow Agnesian Healthcare employee Stacy Chapin.

We waited a few more minutes to see if anyone else would join us for the session, but no luck.

So it was time to start the boot camp, which was a 30-minute program that was followed by a separate 30-minute restorative strength and balance class.

We started by doing some stretches to warm up — and after that is when the fun, or I should say, the pain, began.

Each exercise, with the exception of the ones measured by distance, were performed for 45 seconds, followed by a 15-second break to catch your breath or get water.

I don’t know what it was, but 15 seconds never felt so short. Before I knew it, we were on to the next exercise.

Once the first portion of the program was done, I still felt pretty good.

Read the full story, which includes information on the the second half of the program and the ensuing aftermath, in the June 18, 2015 edition of the Ripon Commonwealth Press.