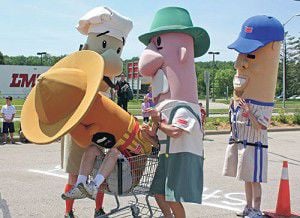 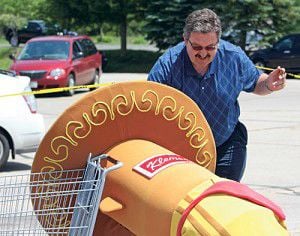 “Blood is thicker than water,” goes the old German proverb.

But what about ketchup?

After last Friday, I think ketchup ist dicker than water and blood.

Last week Friday, my brother Andy and I were among five local folks who agreed to take a one-hour sauna racing around in giant sausage costumes.

We were to chase each other around a portion of Pick ’n Save’s parking lot as part of the store’s Kids Week promotion.

Andy was the Polish sausage. Randy wore the Italian sausage costume. Liz was the hot dog — a name that proved fortuitous — while Rob was dressed as a giant bratwurst. (He was the best wurst I’ve ever seen.)

I was a Chorizo, which sounds more like a Frito-Lay snack than meat processed by Klement’s.

Each of us were racing for charities of our choosing with the understanding that the winning wiener’s selection would receive $250 from the race host, Pick ’n Save.

At our pre-race briefing, one of us said to the others, “Of course, don’t try to win; we’re out there to have fun.” I’m not sure who said that, but I think it was someone who knew he had no chance of winning even if he tried (Hatlen).

My brother and I decided since we wouldn’t win, we’d have a little fun and showboat a bit.

In short, we’d out hot dog the hot dog.

After store director Duwayne Wichman lined us up and started the race, Andy headed the wrong way toward a grocery cart, ran half the course to catch up to me, and then plopped my Chorizo buns (interpret that any way you want) into the cart.

Race over. I tried to pull myself out of our makeshift wienermobile.

Laughter drowned out my pleas for help. I felt like the kid in “A Christmas Story” with his tongue stuck to the frozen flagpole; my predicament was their amusement.

So I waved my arms, hoping fellow sausages would race to my rescue.

After I returned to work, co-worker Steve Wendt showed me a video of the entire race, which he captured on his smartphone.

As I review Wendt’s video, I see that I’m stuck in my grocery cart with a bratwurst, hot dog and Italian sausage trying to pry me out, while the Polish sausage has gone AWOL (A Weiner On the Loose).

I don’t know why Andy couldn’t offer to help his older brother after a race that had all five sausages raising $733 for local charities, thanks to Pick ’n Save.

But I’m not going to bother him about it, particularly since, as president of Ripon Printers, he’s my boss.