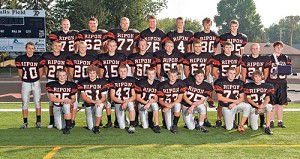 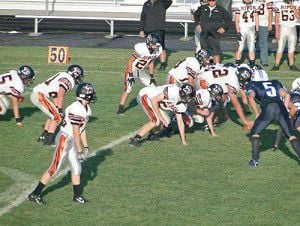 The Ripon High School freshman football team lines up for a play against Little Chute earlier this year. The Tigers won the game 26-6 en route to an undefeated season.

The Ripon High School freshman football team lines up for a play against Little Chute earlier this year. The Tigers won the game 26-6 en route to an undefeated season.

What makes a class special?

If you ask Ripon High School freshmen Joe Sharp and Hunter Merrill, it has nothing to do with having a couple of “star” athletes.

Sharp and Merrill, who were the quarterback and running back of a freshman football team that went undefeated this past season, are quick to credit the entire team.

“We really always worked together as a team and played really strong defense together,” said Sharp, the quarterback.

“What really makes this team special is all of us have very much been playing since kindergarten or before, all different kinds of sports,” Merrill added. “So we know how to play with each other and know what our abilities are. We lost a couple and gained a couple that we have been able to make the team better. And, I think, we just know each other so well that we are able to use that against who we go against.”

The class, which has lost only two games in its time together, as far as Sharp and Merrill can remember, wasted no time displaying that team-first attitude to freshman head coach Jeff Krentz.

Krentz, who just completed his third year in the position, did not hesitate calling the team the best he has been able to coach.

“Yes, absolutely, without a doubt [they are the best],” he said.

Read the full column in the Nov. 7, 2013 edition of the Ripon Commonwealth Press.