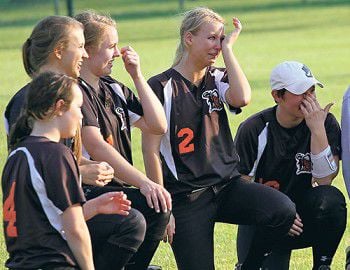 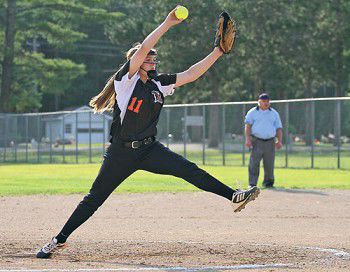 Emma Kautzer winds up before delivering a pitch in Ripon’s 10-4 loss to Wautoma.

Emma Kautzer winds up before delivering a pitch in Ripon’s 10-4 loss to Wautoma.

Despite not winning a game all season, the Ripon Tiger softball team entered last week Wednesday’s regional quarterfinal contest against Wautoma with confidence.

It had hung with the Hornets earlier in the year, losing 5-2, and was making strides in several areas.

The belief for the Tigers that they could win carried into the late innings, when they trailed 5-3.

“It was a close game and there was no doubt in my mind even going into the sixth inning that we can score two more runs here with the way our girls were swinging the bat and our defense was playing out of their minds, too,” Ripon head coach Mallary Nissen said.

Unfortunately, walks did the Tigers in as the Hornets benefitted from several free passes in the sixth inning to score five runs.

Ripon got a run back in the seventh, but it wasn’t enough as its season ended with a 10-4 loss.

“The sixth inning was the downfall for us,” Nissen said. “Obviously, when you walk girls — and then we have passed balls and those runners are advancing or scoring for free basically, where you’re not even giving the defense a chance to make those outs — that’s what’s hurtful for us.”

Read the full story, which includes information about Ripon's offensive output, in the June 4, 2015 edition of the Ripon Commonwealth Press.