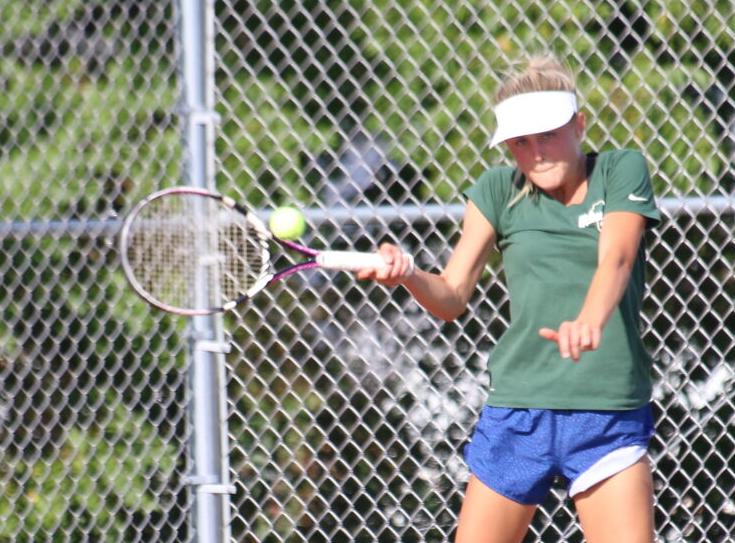 Hadley Neper returns a shot during the first day of practice. Neper will move from No. 1 doubles to No. 1 singles this year. 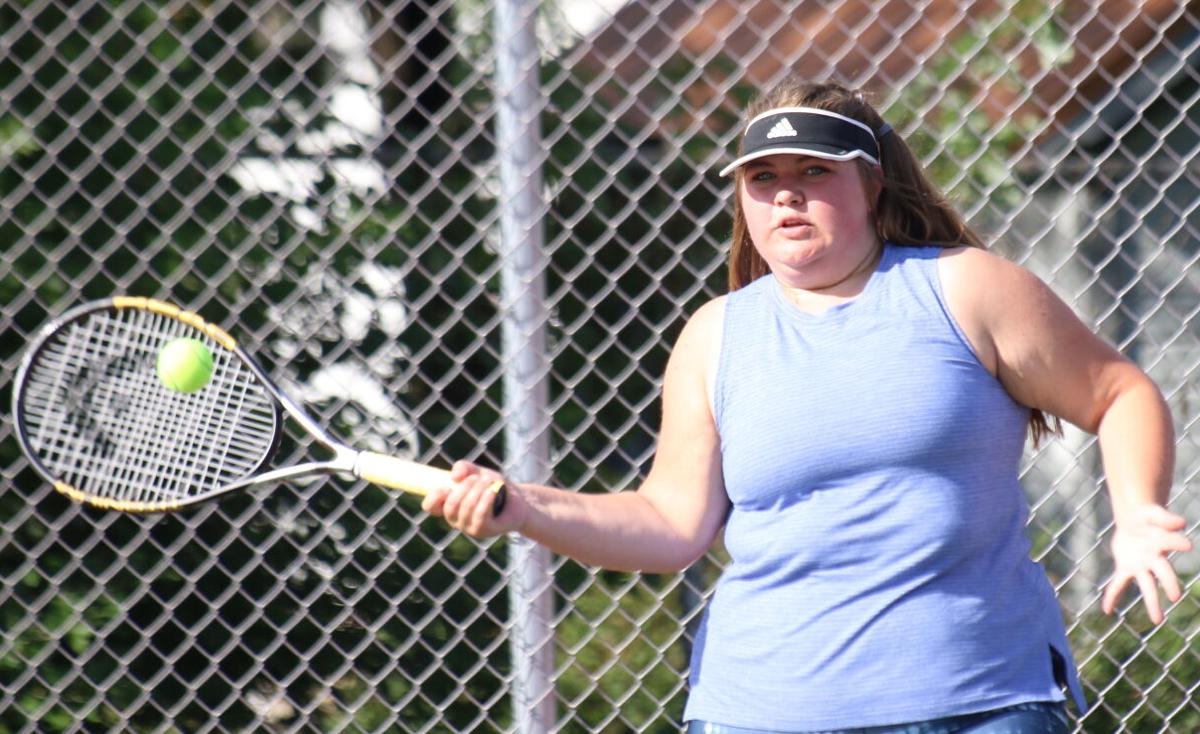 Lizzie Grewal hits a return shot during practice. She is penciled in to play No. 1 doubles this year with Kelly Rudolph. 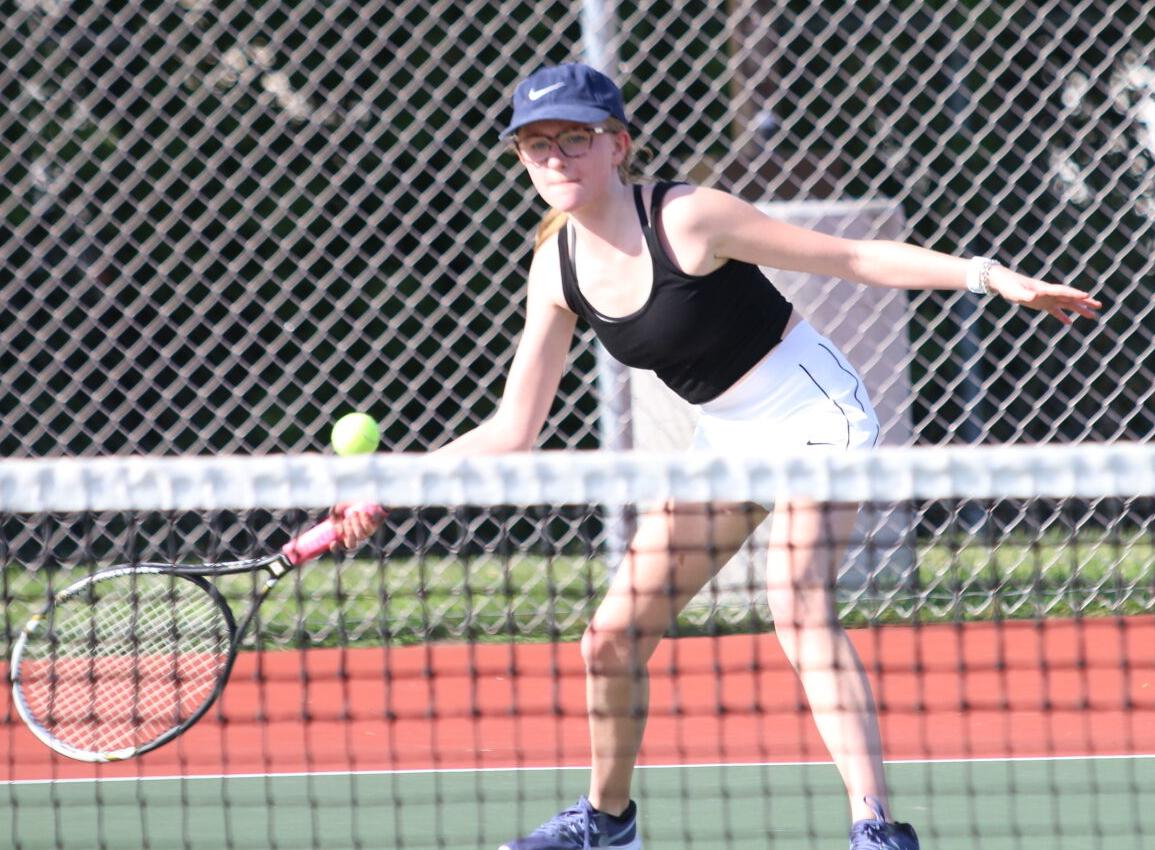 Hadley Neper returns a shot during the first day of practice. Neper will move from No. 1 doubles to No. 1 singles this year.

Lizzie Grewal hits a return shot during practice. She is penciled in to play No. 1 doubles this year with Kelly Rudolph.

With five of the Ripon Tiger girls’ tennis team’s six doubles players from last year graduated, and the lone returner moving to singles, it would be reasonable to think the athletes’ chemistry could be an issue.

But that is not the case according to Ripon head coach Breck Speers, thanks in part to some nicely timed contact days this summer and the girls’ attitude.

“I’ve seen some great things,” he said. “We had this great head start with contact days. I see our team melding together like I’ve never seen it meld together before. We have great, positive attitudes.”

The leadership starts with senior captains Hadley Neper and Artesa Elliott. Neper is the lone returning doubles player from last year, but will be moving from the top doubles position to No. 1 singles.

This comes after she beat the No. 1 and 2 singles players from last year ­— Alexi Tebon and Halle Hadel — in challenge matches.

Speers believes that move will benefit the entire singles’ roster.

“Now we’re stronger at singles in every single position because Lexi’s a stronger player, and yet she’s playing No. 2 this year,” he said. “Halle’s stronger at No. 3, she played No. 2 last year and she’s improved over the summer. Emma Mott has really picked up her game.”

The Ripon head coach added the switch from No. 1 doubles to No. 1 singles for Neper was something he and his assistant coach, Brent Sanderfoot, discussed because Neper was so strong at doubles play.

They ultimately felt the move might be best following the graduation of her partner, Elle Lewis.

“We wanted to put her in doubles, but if she played without Elle, who was very strong, we were hesitant to put her with a partner that she might, in her own mind, feel wasn’t performing the same,” Speers said. “And it was Hadley’s decision to go for singles, but I watched her in her challenge matches and she’s not like the typical high school singles player at Division 2 that just kind of gets the ball back. Hadley reads the court, reads her opponent, presses her opponent, puts it where her opponent is not and guts it out. And so I think she’s going to take the aggressiveness she had in doubles and make the transfer to her singles game.”

While he thinks Neper will be able to hold her own against other schools’ top-singles players, Speers noted the “proof is in the pudding.”

The senior co-captain is not the only singles player Speers is excited about as he noted they’re all more consistent, faster and are able to retrieve better and get more balls back than they were last year.

Other areas in which he’s seen improvement is serving and aggressiveness in attacking the net.

While he believes singles will be perhaps stronger at every position, Speers also noted Ripon has “some winning possibilities” in doubles.

Among the doubles team are Lizzie Grewal and Kelly Rudolph at No. 1, Elliott and Ella Altnau at No. 2 and Lillian Schram and Guimauve Engelschenschilt at No. 3.

Grewal and Rudolph spent some of last season playing No. 3 and 4 singles, respectively, while the other four players got experience last year at the junior varsity level.

While the potential is there to be successful at a lot of positions for Ripon, Speers came back to chemistry as a key to the Tigers’ success.

“The team has been very positive; the girls have been very considerate of one another,” Speers said. “I play a lot of competition myself and if I see my partner messing up a little bit, I might be tempted to say, ‘Hey, do this or do that.’ It usually doesn’t pay off. Partners in doubles and teammates in singles, they need 5-to-1 encouragement over correction. So the thing that I’m continuing to work on is that we all be positive, with our doubles partners, with our teammates.”

He added the girls are responding “very well” to his challenge for them to be positive and gave the example of Mott, Schram and Elliott being just as positive if they lose a match as when they win.

“They care just as much about their own teammate who may have beat them or lost to them [in an intrasquad match] as they care about themselves and it’s just wonderful to watch,” the Ripon coach said.

While Speers cares about the character building and went even as far as calling a couple parents Monday to let them know it’s critical, he also would like to see the Tigers enjoy some success this year.

“I expect us to win a few [matches],” he said. “We did pretty well last year. We won some matches we didn’t expect to. I think the girls maybe got fifth in the conference ... We got some conference awards. It would be pretty nice if we could reduplicate that even though we lost six talented seniors.”

After beginning the season Tuesday on the road against Howards Grove in a match that finished after press time, Ripon will host powerhouse Kohler Thursday afternoon.

It then will travel Saturday to Sheboygan Falls for a triangular with Sheboygan Falls and St. Mary’s Springs, before hitting the road again to face Watertown Luther Prep Tuesday in a road dual.

Thursday’s and Tuesday’s duals will begin at 4 and 4:15 p.m., respectively, while Saturday’s contest is slated to get underway at 10 a.m.