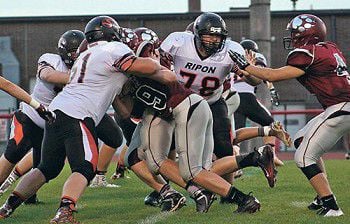 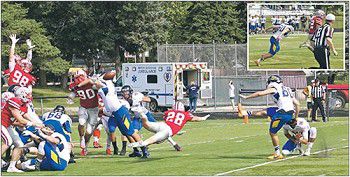 Austen Nissen hands the ball off to Jordan Finley during the first half of Ripon’s 27-6 loss to Winneconne.

Austen Nissen hands the ball off to Jordan Finley during the first half of Ripon’s 27-6 loss to Winneconne.

It was deja vu for the Ripon High School football team last week Friday at Winneconne.

For the second-straight game, Ripon gave up a pair of special teams touchdowns and struggled to block en route to a 27-6 road loss.

“We need to work on our special teams,” Ripon head coach Ronell Hubanks said, adding the Tigers had three punts blocked — one of which was returned for a touchdown. “Offensively, our offensive line continues to struggle. We’re going to continue to shuffle guys around until we find that five that actually work together and block together.”

Special teams hurt Ripon from the start as a blocked punt a couple minutes into the game led to the Wolves’ first touchdown.

Winneconne then recovered a blocked punt and retuned it for score in the third quarter, before scoring on a 73-yard punt return less than two minutes later.

The special teams’ blunders were too much for the Tigers to overcome — especially given their struggles on the offensive line.

Ripon was sacked six times in the game and pressured numerous other times. As a result, it could never get in any sort of rhythm.

“We continue to struggle with the offensive line — which is a big emphasis for me,” Hubanks said, adding he plans on spending additional time in practice on it.

Read the full story, which includes information on what happened when Ripon did get time to throw the ball, in the Sept. 10, 2015 edition of the Ripon Commonwealth Press.