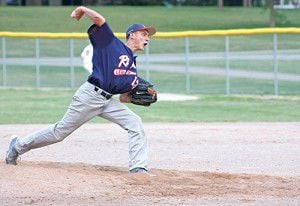 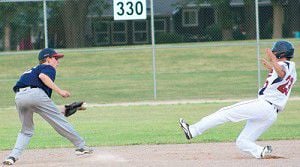 Alex Goyette makes a snow cone catch to record an out against Oconomowoc Tuesday evening.

Alex Goyette makes a snow cone catch to record an out against Oconomowoc Tuesday evening.

For the second time in less than a week, the Ripon American Legion Post 43 baseball team defeated a AA (medium-sized community) or AAA (large) opponent Tuesday evening at Barlow Park.

Ripon, which is an A (small) team, improved its record to 5-0 to begin the season with a 11-0 five-inning victory over Oconomowoc, which is a AAA team.

It also beat Beaver Dam, albeit in much closer fashion, 7-6 last week Thursday in walk-off fashion.

“Coming off last week’s win over Beaver Dam and now beating Oconomowoc — all teams that are either AA or AAA — it’s a wonderful start [to the season]” Ripon head coach Keith Cluppert said.

A “wonderful start” is just what Ripon Post 43 got off to Tuesday.

It scored two runs in the bottom of the first inning on a Jess Ehrenberg RBI double and Payton Bryden two-out, RBI single.

“I think getting a lead on these guys is important,” Cluppert said. “Actually, I talked to one of the players — and at that time it was 4-0 — and said, ‘If we lose this game, it’s already a victory to me because it means we’re not going to get skunked in this game.’”

Ripon ended up being the team that did the skunking, scoring nine runs in the bottom of the third inning — seven of which came with two outs — to take an 11-0 lead.

Read the full story, which includes more information on this game as well as wins over Jackson, Green Lake and Beaver Dam, in the June 28, 2012 edition of the Ripon Commonwealth Press.