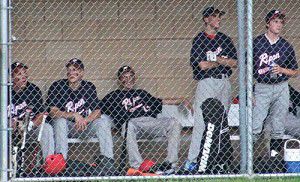 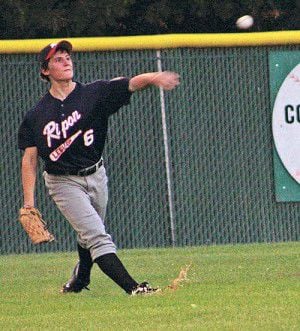 Ben Ermatinger fires the ball in after making a catch last week Saturday against Green Lake.

Ben Ermatinger fires the ball in after making a catch last week Saturday against Green Lake.

School may be out for the summer, but if the Ripon American Legion baseball team hopes to have success it might be all about chemistry.

The team welcomes back many pieces of the puzzle that helped the Tiger high school baseball team come within one out of forcing extra innings in the regional finals less than a month ago.

It also opens its arms for several new players who didn’t see a lot of varsity playing time or were a member of the junior varsity roster.

“We’ve got a good nucleus coming back and we have got some good new players coming in, some raw talent to work with,” assistant coach Howard Hansen said, adding it will be a different chemistry. “The nice thing about our schedule is we have a lot of games in a short amount of time so everybody is going to get a lot of action.”

While there is a mix of both returning and new players, Legion head coach Keith Cluppert is optimistic the team’s success this past spring in high school ball can make a difference.

“I think you can kind of build a little bit [off of the success] because we have got like six or seven guys that are off the high school team that have worked together and are gelled a little bit,” Cluppert said. “But bringing in five or six new guys [means] everybody is going to have to tweak a little bit; find where they fit in and what talents they have got. Coaches are going to have to figure out who can do what in all different aspects.”

One position that mixes both types of players and is considered a strength entering the season, according to Hansen, is at pitcher.

Read the full story, which includes a schedule of the team's games, in the June 20, 2013 edition of the Ripon Commonwealth Press.