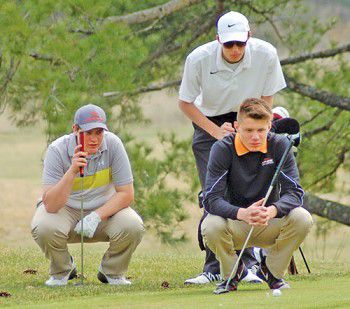 Reading the green during the Wautoma Scramble is the three-man team of, from left, Forest Gelhar, Sam Klegon and J.J. Zack. 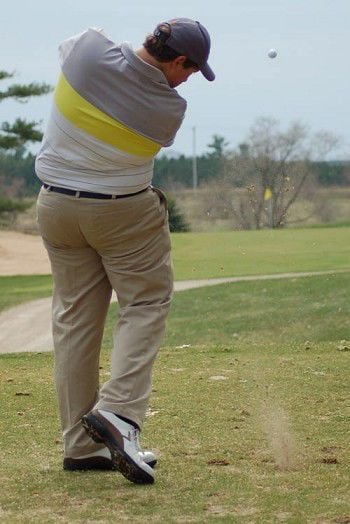 Reading the green during the Wautoma Scramble is the three-man team of, from left, Forest Gelhar, Sam Klegon and J.J. Zack.

The Ripon High School golf team took a step in the right direction Monday in a home triangular at the Golf Courses of Lawsonia.

It shot a season-best 190 to finish second out of three teams.

Freedom won the triangular with a score of 179, while Clintonville rounded out the field with a 222.

Ripon’s score of 190 is five strokes better than it shot in Waupaca to open the season and 24 shots less than it fired last week in tough weather conditions at Mascoutin.

“I think as a young team kind of working to get a little better, I think individually, we are improving as it goes,” Ripon head coach Rick Kelm said. “There were some pretty good performances.”

Reed Shohoney led the Tigers for the fourth-straight meet with a six-over-par 42. It was just two strokes off the pace set by meet medalist Justin Meyer of Freedom.

The rest of the Ripon lineup also stepped up during the match.

Bobby Moran and Quinn Gilfillian each shot a 48, while Sam Klegon and J.J. Zack finished in 52 and 59 strokes, respectively.

The scores were a season-best for everybody but Gilfillian, who shot one stroke better at Waupaca.

Read the full story, which includes results from last week Friday's Wautoma Scramble, in the April 30, 2015 edition of the Ripon Commonwealth Press.