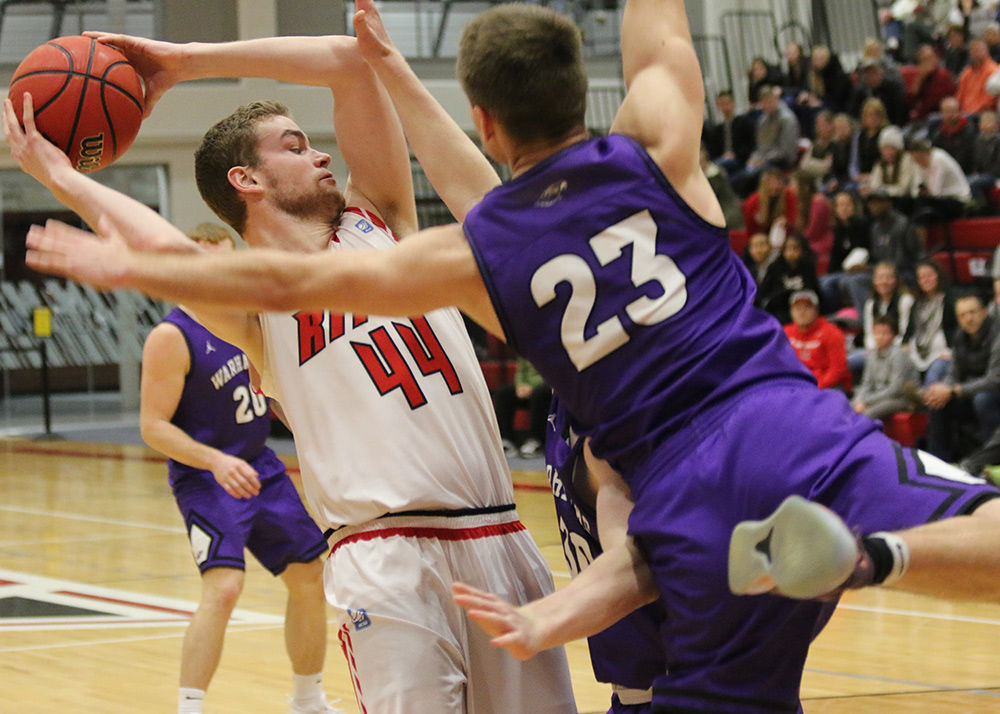 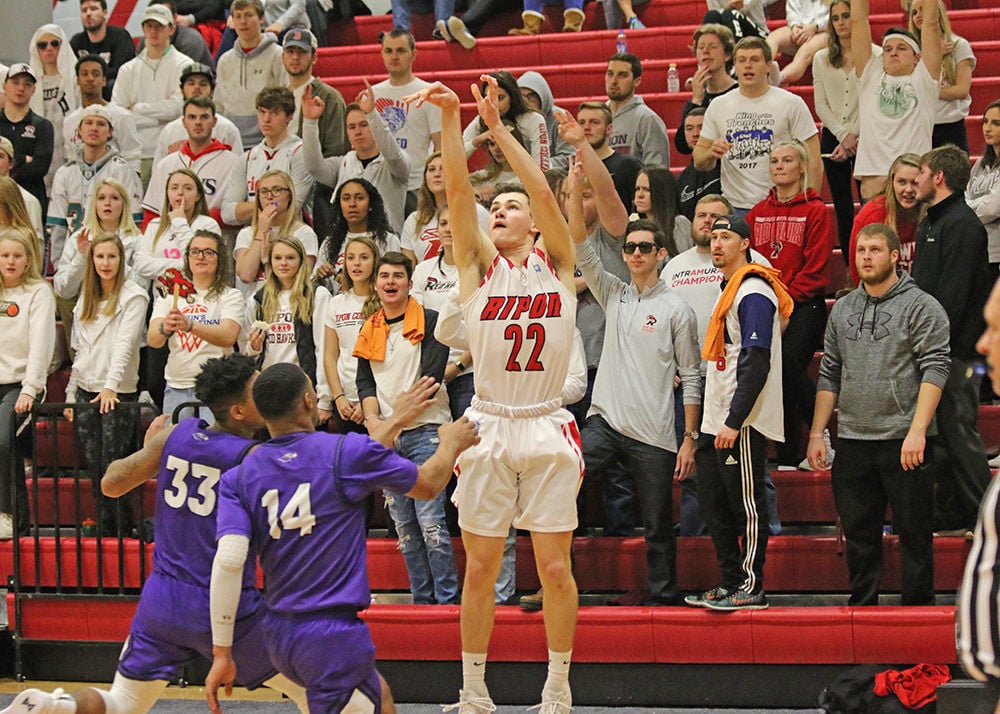 Ryan Steffes follows through on a 3-point attempt in front of the Ripon student section during the Red Hawks’ game against UW-Whitewater. 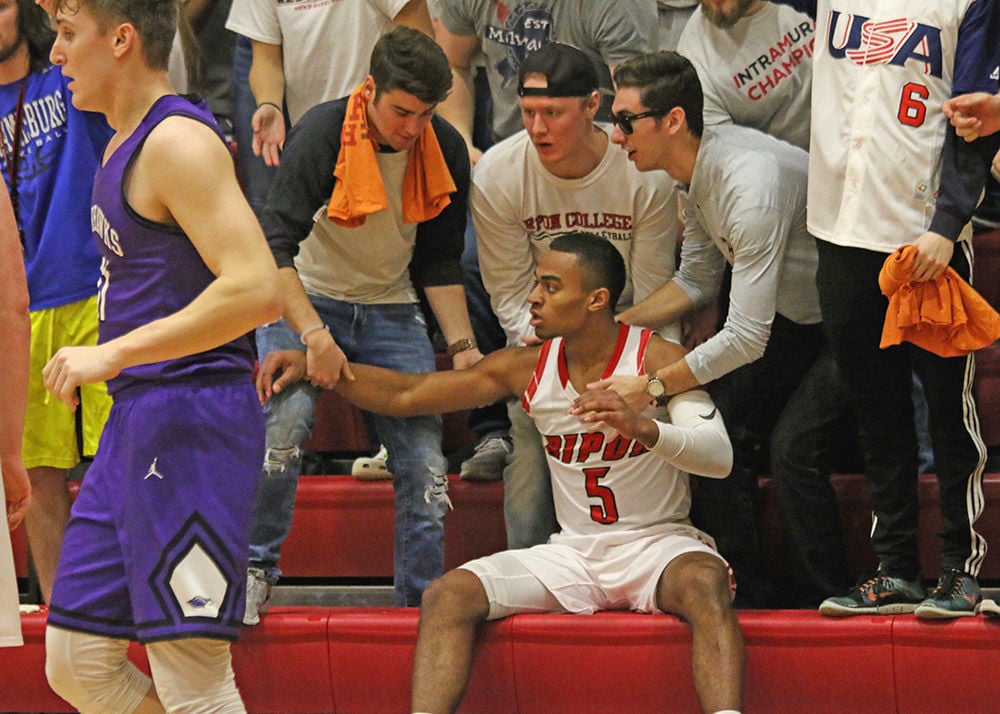 Brandon native Jaylen Mahone is helped up by the Ripon student section after diving into the crowd for a loose ball. 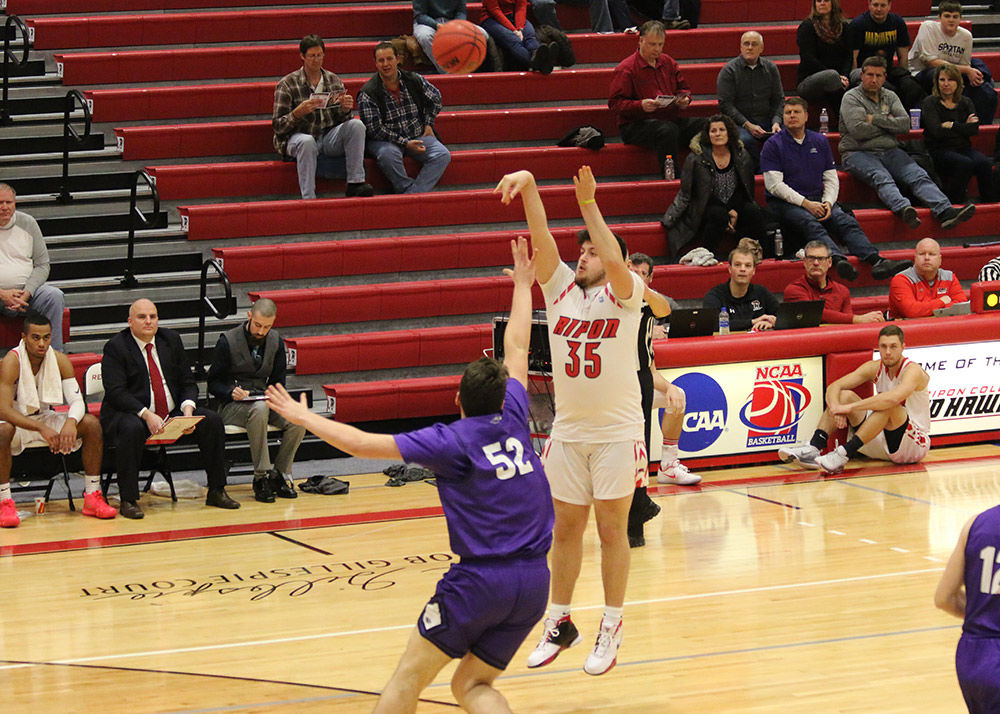 Ben Young unleashes a 3-pointer late in the game.

Ryan Steffes follows through on a 3-point attempt in front of the Ripon student section during the Red Hawks’ game against UW-Whitewater.

Brandon native Jaylen Mahone is helped up by the Ripon student section after diving into the crowd for a loose ball.

Ben Young unleashes a 3-pointer late in the game.

When Ryan Kane crafted his team’s schedule, he wanted to find the toughest opponents to prepare his team for conference play.

The Ripon College head men’s basketball coach did just that.

For the second-straight game, the Red Hawks faced a team ranked inside D3Hoops.com’s Top-25 last week Saturday and came out of it with many lessons.

Lessons such as, how to make halftime adjustments.

The Red Hawks played much better in the second half of an 83-61 home loss to the No. 11-ranked University of Wisconsin-Whitewater Warhawks.

Ripon (4-5 overall) was out-scored by just two points in the final 20 minutes and did a better job on defense.

“The message at half was ... we can’t sacrifice on the defensive end of the floor — and certainly they were a challenge to defend,” Kane said, noting the Red Hawks showed signs of life offensively in the first half and got some shots to fall. “I felt like we had been playing better defensively all season. That was kind of our worst half defensively, but it was also probably a perfect storm. They played pretty well obviously, and we struggled.”

He noted Ripon, which is primarily made up of freshmen, has been in the situation before of needing to recover from a bad half.

Read the full story, which includes information on a loss to No. 7-ranked University of Wisconsin-Stevens Point, in the Dec. 20, 2018 edition of the Ripon Commonwealth Press.