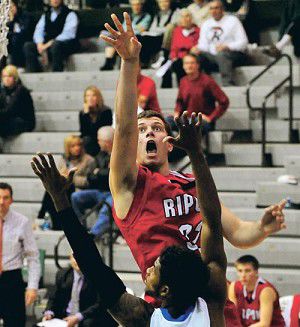 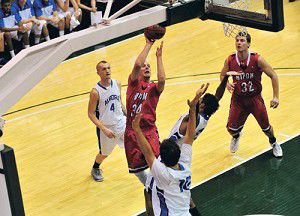 David Klink takes a shot during Ripon’s 83-75 loss to Aurora University last week Friday. Klink and the rest of the Red Hawks rebounded a day later to defeat Manchester 83-73.

David Klink takes a shot during Ripon’s 83-75 loss to Aurora University last week Friday. Klink and the rest of the Red Hawks rebounded a day later to defeat Manchester 83-73.

For Ripon College men’s head basketball coach Ryan Kane, the first few games of a season are to establish the team’s identity, what it needs to get better at and see if it can compete for a full 40 minutes.

The Red Hawks learned a lot about themselves en route to a third-place finish (1-1 record) at the Illinois Wesleyan Tournament.

They lost to Aurora University 83-75 last week Friday in the first game of the tournament, before bouncing back a day later to defeat Manchester University 83-73.

“The first night, we did not play a full, 40-minute game,” Kane said. “The first six minutes were real slow for us and after we kind of settled in we were fine. We talked about it on Saturday that we are just trying to put together closer to 40 minutes, at least more consistent than what we did Friday night, and we did that as well.

“We really focused on those first 5 minutes, coming out and just being different competitively in the first 5 minutes and we did that and we were able to sustain it for a full 40 minutes against a good team.”

In its first game, Ripon fell behind Aurora 28-9 to begin the game due in large part to 3-of-18 shooting and four turnovers.

After trailing by double-digits for almost the entire game, the Red Hawks cut the deficit to five points with less than 30 seconds left but could not get any closer.

“We had the ball down five with 24 seconds and Kyle [Loughrin] missed a lay-up with 20 seconds to go to cut it to three and that kind of put it on ice,” Kane said. “He had really led us that game and really kind of kept pushing.

“I think our guys were running out of gas. There are so many things that have to go right to overcome a deficit like we had.”

Read the full story, which includes more information about the Manchester game, in the Nov. 21, 2013 edition of the Ripon Commonwealth Press.