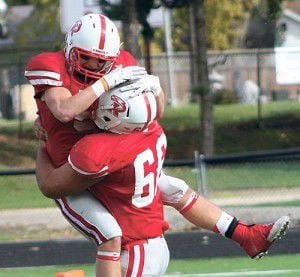 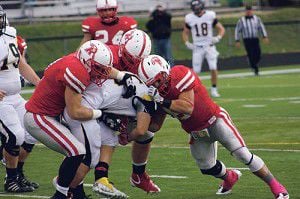 A trio of Red Hawk defenders team up to bring down a Beloit ballcarrier in the second quarter.

A trio of Red Hawk defenders team up to bring down a Beloit ballcarrier in the second quarter.

Last week Saturday was “Take a Kid to the Game” day in Ripon.

The Ripon College football team made sure it put on a clinic.

The Red Hawks scored the first 33 points of the game en route to an easy 40-14 victory over the Beloit Buccaneers at Ingalls Field.

The 26-point margin of victory is Ripon’s largest of the season. Its previous high was eight points, set three weeks ago at Knox College.

On paper, the game had all the signs of being the blowout it was, but was far from a certainty with the way the Hawks had been playing.

In all but one of its games this season, Ripon (4-2 conference, 5-2 overall) has either fell behind big early in the game or struggled against an opponent it should have easily put away.

“It is something that we have tried to do every week, obviously, but we really focused on playing up to our level,” Ripon head coach Ron Ernst said of the fast start. “Beloit came in with a 1-6 record and our goal was to play up to our level and really focus on what we do best. It does not matter who the opponent is; what we want to try and do is be the very best we can be and we had not done that for a few games this year. But I felt Saturday we really had a chance to come out and really get things goings the way we wanted to.”

Read the full story in the Oct. 31, 2013 edition of the Ripon Commonwealth Press.