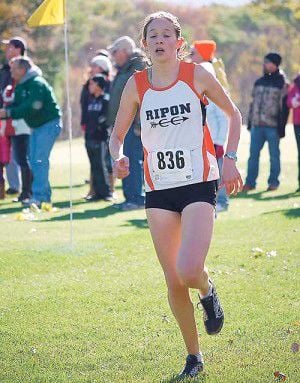 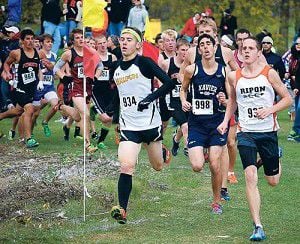 Ben Reilly, right, rounds the corner during last week Saturday’s sectional meet in Mayville. He was three spots and 20 seconds away from qualifying for state.

Ben Reilly, right, rounds the corner during last week Saturday’s sectional meet in Mayville. He was three spots and 20 seconds away from qualifying for state.

For the first time in 20 years, the Ripon High School cross country team will not be represented at the WIAA State Championships.

But it wasn’t for a lack of effort.

Despite those results, disappointment existed.

“We have always had a tough sectional race up there and it is disappointing that somebody wasn’t able to qualify,” Ripon head coach Chris Gatzke said. “You wonder, ‘Did we not do something properly during the season?’ By not getting there, it is ‘What did you do wrong?’ rather than, ‘Hey, great, we did the right things to get them there.’ Now it is all looking back and beating yourself up trying to figure what could you have done differently to get them there ...”

As a team, the boys placed fifth out of 14 schools and the girls finished seventh out of 14 teams.

Cunningham’s near miss and the rest of the girls

Katelin Cunningham was the closest Ripon runner to qualifying.

The senior finished in seventh place among the individuals who did not qualify as a team — two spots and six seconds out of the fifth and final qualifying spot.

She was trying to become just the third girl in school history to qualify for state all four years.

“[I am] disappointed that we weren’t able to get Katelin through for the fourth year,” Gatzke said. “I don’t even have a very good reason why she did or didn’t. It just wasn’t there. The difficult part is it comes down to one race.”

Cunningham finished the race 11th overall with a season-best time of 16 minutes, 16 seconds.

Read the full story, which includes information on a near-miss by Ben Reilly, in the Oct. 31, 2013 edition of the Ripon Commonwealth Press.