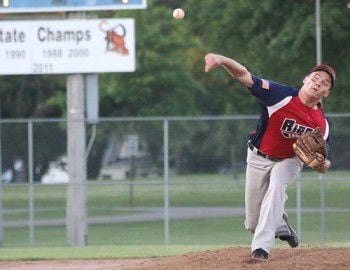 Payton Bryden delivers a pitch in Ripon’s 2-1 victory over Mayville. 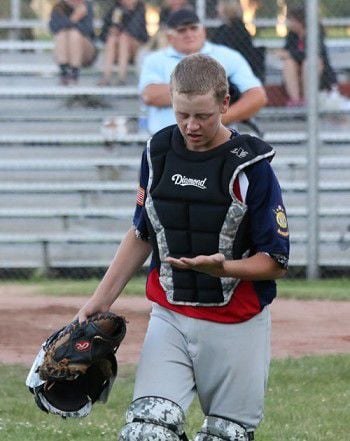 Brice Path glances at his hand after catching Payton Bryden’s fastball. Behind him is umpire Harvey Koentopp.

Payton Bryden delivers a pitch in Ripon’s 2-1 victory over Mayville.

Brice Path glances at his hand after catching Payton Bryden’s fastball. Behind him is umpire Harvey Koentopp.

Ripon has struggled to get players to join this year. It had only eight at the start of the day Monday, before getting as many as seven more throughout the day and Tuesday.

Rosters have to be finalized through the league office by the end of the day today (Wednesday).

“Seriously, this year, it’s just to put a team on the field,” Cluppert said of his main goal for this season. “When you look at it, it’s game day and we don’t know yet [if we will have enough players]. We’re hoping based on what people say they are going to do.”

The headaches caused by trying to find players to fill a team before the deadline has put a damper on what otherwise would be an optimistic outlook for the season.

“I’ve actually said once at our sign-up meeting and another at one of our practices: our core of people are good,” Cluppert said.

Among the reasons for optimism is the return of nearly the entire pitching staff from last year.

Ripon also can lean on the arms of Andrew Radloff, Jack Kinziger and Ben Ermatinger.

Both Radloff and Kinziger threw for the high school team this past spring, while Ermatinger is returning to the team after completing his first year of college.

Pitching depth figures to be a major key to Ripon’s success this year, given the number of games scheduled in a short period.

Ripon is slated to play five games in the first four days of its season, including the doubleheader Tuesday against Mayville, and then 13 in the first 16 days of July — which is more than the Milwaukee Brewers will play during that time.

Read the full story, which includes more information on Ripon's busy schedule, as well as changes with its conference, in the June 25, 2015 edition of the Ripon Commonwealth Press.